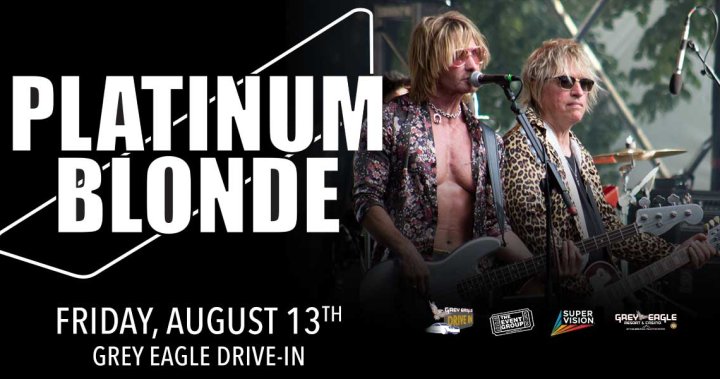 The August shows at the Grey Eagle Drive In will involve a new and exciting arrangement… No Vehicles! Come join us for an outdoor general admission show! Stand, roam, or bring your lawn chairs and enjoy Platinum Blonde LIVE on stage in the outdoor Grey Eagle Drive In lot! Stay tuned for further announcements, rules and regulations to come!

The Grey Eagle Drive In is unlike any venue you will find and just minutes from downtown! Located on the beautiful Tsuut’ina Nation at The Grey Eagle Resort & Casino, the outdoor 206 car capacity space along with all West facing hotel rooms overlook the Rocky Mountains! The site features a cutting edge semi-trailer covered stage, with surround sound which is also available through car radios. Three large LED screens will project the action on stage, under the stars!

More: The Grey Eagle Drive In, supported by Global Calgary and 770 CHQR

Platinum Blonde is back, but don’t call it a reunion. In reality, it’s more like the band has simply taken a finger off of the pause button with the release of its new album Now & Never.

With five albums that have all gone Platinum — seven times over — and garnered multiple Juno Award nominations, along with an induction into the Music and Broadcast Industry Hall of Fame, it’s easy to wonder what else was there is for Platinum Blonde to accomplish? As it turns out, quite a lot.

“There’s been no resting on the laurels of the past successes,” frontman Mark Holmes said. “I appreciate every last thing I’ve got, but you have to embrace what’s coming towards you. The golden age is forever, it’s right now.”

Indeed, the re-ignition of the band has been a very long time coming. It wasn’t for lack of demand – the appetite for the signature new wave rock sound that swept up throngs of fans has hardly waned since the boys pressed pause in 1991.

In January 1983, at the beginning of a decade where pop music was often adrift in flash and kitsch, the Toronto-based outfit consisting of Holmes, Sergio Galli (guitar), and Chris Steffler (drums) emerged from the club scene with a more substantial offering. At the core of their unremittingly danceable new wave influence were three musically fluent artists who had something relevant to say.

Accolade for the band came fast and furiously. In autumn 1983 the group debuted Six Track Attack – an EP washed with crisp, slinky guitar and synth along with punchy rhythms. The release fuelled such an enormous amount of hype for the band that it charted at #39 – an unprecedented feat for the era. Instantly, Platinum Blonde became one of the biggest commodities of the burgeoning new wave landscape. Six Track Attack became the ground on which the triple-Platinum selling LP Standing In The Dark was built. Before the close of 1984, the band had invaded radio airwaves with four hit singles – “Doesn’t Really Matter”, “Standing In The Dark”, “Sad Sad Rain”, and “Not In Love”.

Across time, the one constant of Platinum Blonde has always been an unquenchable yen to evolve. With Now & Never, the band that’s made a career of forging its own path continues to roam free.