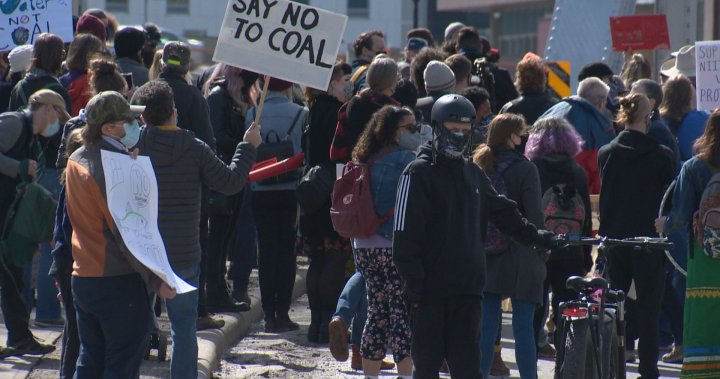 Dozens gathered in Calgary on Saturday to rally against open-pit coal mining on the eastern slopes of the Rocky Mountains.

Niitsitapi Water Protectors, the group that organized a walk across Reconciliation Bridge, are fighting for clean drinking water, Indigenous rights and land protection.

“The eastern slopes are sacred to many, and as treaty people, it is our shared responsibility to protect the land and water from molestation at the hands of foreign mining companies,” the group said in a press release.

Read more: Albertans will be able to say no to coal during consultations: Savage

The organization said proposed mine sites are home to diverse ecosystems that “provide essential habitats for wildlife, traditional medicines and various plant species.”

“Industry coal projects will cause selenium and other toxic minerals to be released into the headwaters of the Oldman River. Selenium is toxic to fish and wildlife, and can have long-term effects on humans,” it said.

“Coal development will not only impact water quality but will affect water security in southern Alberta. Open-pit coal mining will degrade the environment and its life-sustaining gift of clear and clean water.”

The group formed in 2020 in response to the “threat of coal development projects within Blackfoot traditional territory and the headwaters of the Oldman River.”

In February 2021, after public pressure, the Alberta government reinstated the 1976 coal policy protecting the area from open-pit mining. The government rescinded the policy in May 2020 without public consultation.

The province said it will start consultations on the issue at the end of March.