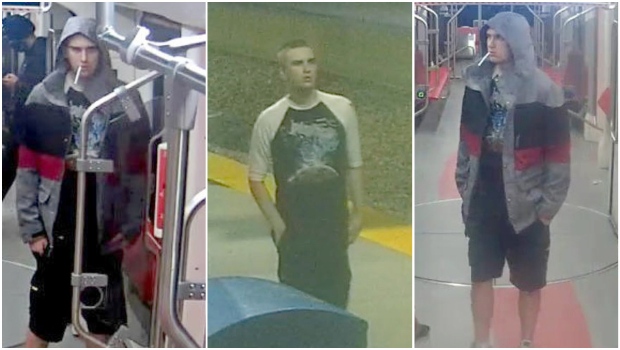 CALGARY — Investigators are hoping someone will recognize a man accused of stabbing a woman multiple times in what is being called a random attack in downtown Calgary.

The woman was standing on the southwest corner of Seventh Avenue and First Street S.W. about 11:40 p.m. on Tuesday when she was approached from behind by a man and stabbed multiple times.

The suspect fled and a woman standing nearby yelled for help.

Officers arrived quickly and rendered first aid to the victim, who was transported to hospital in stable condition.

“It is believed that this was a random attack, and that the victim and the suspect did not know each other,” police said in a release.

“The investigation has revealed they had no prior interaction leading up to the stabbing.”

Investigators were able to find CCTV images of a suspect.

He is described as:

“The CCTV photos we were able to find are clear. Someone out there will know who this person is,” said Dist. 1 Insp. Clare Smart.

“Rest assured we will find this person and we will hold him accountable for this completely unacceptable violence. Everyone has the right to move freely about our downtown without the fear or threat of violence. This behaviour is not tolerated, and we will put a stop to it.”