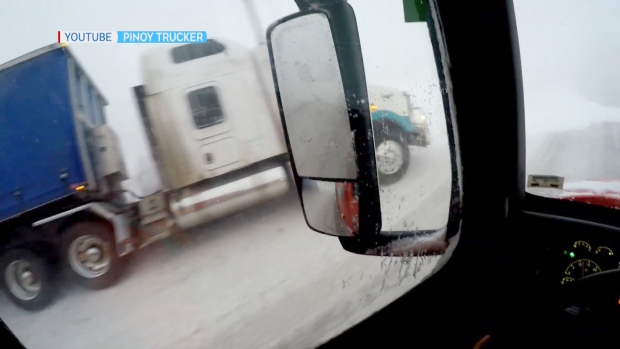 CALGARY — The moment a semi flipped onto its side while careening down the Trans-Canada Highway in southeast Alberta was captured on camera Monday morning.

Mark Anthony Malinab — who posts videos to his YouTube page titled Pinoy Trucker and has nearly 80,000 subscribers — was headed from Winnipeg to B.C. carrying a load of meat when the crash happened just after 7 a.m. near Range Road 204.

Malinab said two semis were parked in the far right westbound lane of Highway 1, so he moved to the centre lane to pass them.

As he did that, another truck was also approaching from behind, said Malinab. That truck also moved over one lane, and ended up flipping onto its side as it passed Malinab’s truck, which was caught on camera by the GoPro mounted to his head.

“Instead of hitting me in the back he decided to ditch the truck,” he said.

Malinab then jumped out of his truck and ran to help the other driver, who wasn’t seriously hurt and managed to climb out on his own.

Malinab believes the truck that flipped was carrying a load of live chickens.

It was one of several crashs reported on Alberta highways due to wind and snowy weather.

Between 50 and 70 vehicles were believed to be involved in a crash on Higwhay 1 near Brooks that saw the westbound lanes shut down for several hours.

A reception centre has been opened at the Heritage Inn at 1217 Second Street West in the city of Brooks to accommodate stranded travellers.

And emergency crews were also called to a crash on the QEII Highway near the Highway 72 interchange between Crossfield and Airdrie that left a transport truck on its side, backing traffic up for several hours.