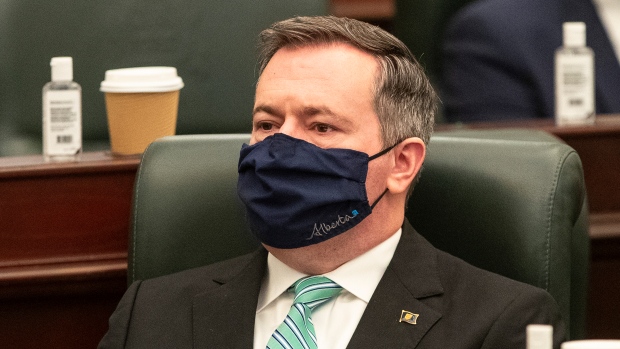 CALGARY — Dissent from within the United Conservative Party has reached new heights with a call from within caucus for Premier Jason Kenney to resign.

Todd Loewen, caucus chair and MLA for the Central Peace-Notley riding in northwestern Alberta, posted an open letter to his Facebook page overnight announcing his resignation as caucus chair and stating “we must remove the primary source of this dysfunction, Premier Jason Kenney.”

The letter highlights Loewen’s concerns that caucus can no longer function properly and elected members feel left out of key decisions.

Loewen says his resignation from caucus chair — he plans to continue serving as the UCP MLA for Central Peace-Notley — affords him the ability to speak freely.

The letter brought up the tarnished relationship between the provincial government and Alberta doctors regarding compensation contracts that were at one point dissolved by government, as well the controversy around the province’s proposed changes to coal mining on the eastern slopes.

He also says that communication with the public has been “contradictory, confusing, and needlessly inflammatory” which has led to Albertans losing trust in government.

Loewen also called the premier’s response to the federal government as weak and ineffective.

Duane Bratt, an associate professor from Mount Royal University and political analyst, says it’s been a tumultuous few years for Kenney since his arrival in Alberta’s provincial political scene.

“Its still amazing given the work that Jason Kenney did building this party, creating this party, merging the Wildrose and the Progressive conservatives, winning a majority government about two years ago to see this coming down,” said Bratt. “It shows that the United Conservative Party is not very united right now.”

Bratt believes this is the first time a UCP MLA has publicly called for the premier’s resignation, adding Loewen’s letter is a major escalation in dissent  compared to when 18 backbench MLAs signed a letter opposing public health restrictions or rumblings from constituency associations regarding calls for a leadership review that were not confirmed.

All this comes after a recent Angus Reid poll showed approval ratings for Kenney have tanked in the onset of the pandemic. Recent results suggest 75 per cent of Albertans think Kenney is doing a bad job.

This rating trend is similar to what premiers Redford, Stelmach and Getty faced before they were ousted.