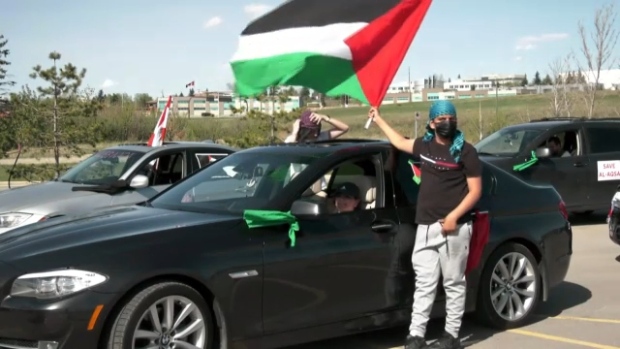 CALGARY — Thousands of Calgarians are protesting and throwing their support behind the Palestinian Territories as mounting violence sweeps over the Middle East.

Tensions are rising worldwide as Arab and Jewish communities take to the streets in dozens of major cities to protest the conflict and to express their displeasure with the other side.

In Calgary, Sunday saw a third day of gatherings to denounce the violence and injustices against Palestinian people.

The protests come following the deadliest day in a week of fighting between Israeli forces and the Hamas militant group.

Sunday’s convoy, which made its way to City Hall, involved more than a thousand vehicles.

The tension began in east Jerusalem in early May when Palestinians protested attempts by settlers to forcibly evict a number of families from their homes.

Hamas fired rockets toward Jerusalem late Monday, triggering an Israeli assault on Gaza. Since then, Hamas has fired more than 2,000 rockets, though most have either fallen short or been intercepted by anti-missile defences.

Israel’s warplanes and artillery have struck hundreds of targets around blockaded Gaza, where some two million Palestinians live.

As of Sunday morning, at least 145 Palestinians and eight Israelis have died.

Calgary wasn’t the only city with protests.

Pro-Israel groups, which were vocally outnumbered in many Canadian cities, counter-protested in cities like Toronto and Winnipeg.

In Calgary, the community chose instead to meet online.

Rabbi Leonard Cohen cited the pandemic when speaking about the choice.

“Everyone is in distress, everyone is heartbroken and praying,” he said. “Unfortunately, the inflammatory rhetoric around everything that is going on is leading to an escalation in anti-semitism.”