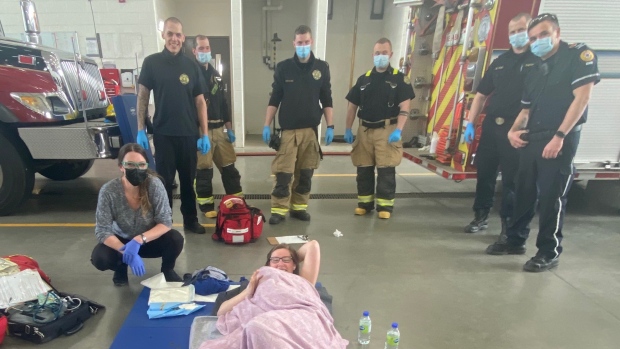 CALGARY — A Linden, AB. mother is thanking firefighters in Balzac after she gave birth on the floor of their station.

Randi Dyck says her and her husband Peter were completely caught off guard by the birth of their fourth child.

“There were some contractions and eventually I could tell I was in labour, but I knew it wasn’t time to go or anything,” she said.

“And then all of a sudden it was.”

The Dycks live about an hour away from Calgary, where Randi wanted to give birth. So they hit the highway to reach the city.

“But (the baby) had other plans,” she said. “Very quickly the contractions got a lot closer together. By the time we hit Beiseker I think they were every three minutes.”

So the couple had to improvise.

Rounding the corner into Balzac, Peter thought of a plan.

“He said, ‘the fire station is right there and I see the doors and they’re open. So that’s where we’re going.'”

The couple ended up at Balzac Fire Station 107, where they were helped along by half a dozen firefighters.

Charlie, a healthy addition to the family, was born on April 10.

“I actually arrived about two minutes after the baby had been delivered, so I was able to complete the delivery,” midwife Christia Copeland said. “It was a very precipitous labour and delivery, but it was uncomplicated, thankfully.”

“It was so nice to have people there who knew how to react,” Randi said. “I don’t think my husband would’ve loved catching the baby.”

“(The firefighters) were so helpful and professional,” Copeland added. “To me, it was a good example of an inter-professional collaboration.”

The newborn even got something to remember his impromptu-doctors by…even though this is one story the Dyck family will never forget.

“My husband saw the name tag on (Capt. Devin Teal’s) uniform and thought, ‘hey Charlie Teal, that has a nice ring to it,’ because his last name was Teal,” Randi said.