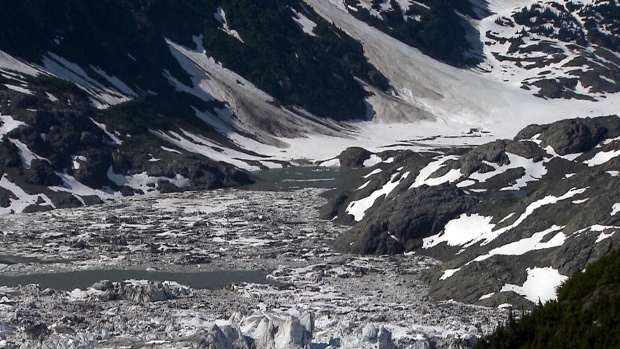 EDMONTON — The recent heat wave amplified glacier melt in the Rocky Mountains along the Icefields Parkway, resulting in lasting consequences for Alberta and areas relying on glacial headwaters.

University of Alberta atmospheric sciences associate professor Jeff Kavanaugh examined the impacts the heat wave had on the Wapta Icefield, a headwater source for waters flowing past Calgary.

He looked at temperatures registered at weather stations along the Icefields Parkway, a 232-km stretch of highway winding along the Continental Divide that is home to 100 glaciers.

“What I saw was that it was incredibly warm,” Kavanaugh said, as he compared temperatures experienced in the area over the past 12 years.

Last year during the same time in June, there was one day where the ice field encountered temperatures around 26 degrees, however, it was for a matter of hours.

“We were about nine degrees, 10 degrees Celsius higher, on average, for the entire 10-day span (of the heat wave),” Kavanaugh said.

“With this bump up, we didn’t see cooling,” he added. “A quite dramatic change.

“We’ve had an additional month of melt, equivalently, built into this brief heat dome time.”

Kavanaugh calculated that the glacial melt experienced during the heat wave was about three times the amount of the average melt between 2009 and 2020. According to him, the amount he calculated was confirmed by data collected at headwater discharge stations at Lake Louise.

GLACIAL LIFECYCLE AT RISK AS CLIMATE CONTINUES TO WARM

For Kavanaugh, an alarming trend has been the level at which the snow accumulation zones for glaciers are moving higher and higher in elevations per year.

“Glaciers grow where you receive more snowfall every year than what melts away,” he explained. “That is generally high up in the mountains.

The natural lifecycle for a glacier, Kavanaugh says, is for it to grow during the winter, forcing its extremities to flow toward lower elevations where they slowly melt.

“A glacier is always a battle between accumulation, flow, and melt,” he acknowledged.

“Right now what we are seeing is the elevation at which snow persists year-in year-out is rising. So you have a smaller area gathering snow and a larger and larger area losing snow and ice mass.”

That change over time was unsustainable, but as more events like the recent heat wave occur, the risk of losing glaciers increases significantly, Kavanaugh says, since there is more glacial ice exposed.

“Now that we’ve exposed more glacial ice, the rest of the summer will have an outsized impact on melt,” he said. “This year will get a lot of melt, which will be great for agriculture, our populations, and healthy for the fish.

LOSS OF GLACIERS HAS ‘MASSIVE’ IMPACT ON WATER SUPPLY

Glaciers supply much of Alberta and western Canada with drinking water, especially at times of the year when other sources of water are at their lowest, Kavanaugh said.

“Glaciers pick up the slack right when we need it the most,” he said, as they provide water supply after the snow pack has melted away, rainfall is at its lowest, and evaporation from the landscape is at its maximum.

“We’ve come to rely on these summer supplies of water provided by the glaciers. And they’re not going to last much longer.”