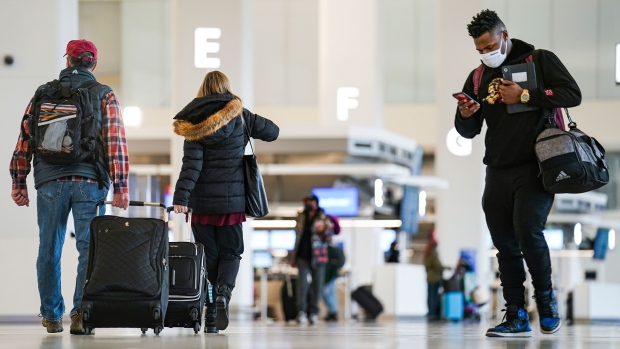 OTTAWA — Citing the evolving situation with the identified COVID-19 variants from other countries, the prime minister is strongly urging Canadians not to travel because federal travel rules could change very quickly.

In French, the prime minister implored anyone who has booked trips to cancel them, saying a vacation is not worth it given the uncertainty and chance of either contracting the virus or ending up stranded abroad.

He said the federal government is closely following the latest science on more transmissible strains, such as those from the U.K. and Brazil, and officials could impose new restrictions without advance notice at any time.

The government continues to advise against any non-essential travel, though that decision is left up to Canadians and no outright ban is in place.

Acknowledging that people have the right to travel, Trudeau said the government also has the ability to impose penalties for those endangering others’ health.

Canada has had restrictions on international travellers entering the country since mid-March 2020, as well as a mandatory 14-day quarantine period for anyone who returns from an international location.

In December, while some Canadians opted to vacation abroad, the federal government imposed new travel rules, including the requirement to show a negative COVID-19 test result before boarding a flight coming back into this country. As well, for a short period of time flights from the U.K. were banned with little notice, but have since resumed.

Violating any of Canada’s international travel screening and self-isolation requirements can result in charges under the Quarantine Act, with maximum penalties of up to six months in jail or a fine of up to $75,000.

According to Chief Public Health Officer Dr. Theresa Tam, in Canada there have been 23 confirmed cases of the variant first reported in the U.K., and two cases of the South African strain. Further, the Public Health Agency of Canada is reporting nearly 200 recent international flights that have landed in Canada with at least one COVID-19 positive passenger aboard.

“Every vacation travel we postpone for a better time in the future, every outing or activity we avoid, shorten, or limit to essentials… helps to reduce spread of the virus,” Tam said Tuesday.