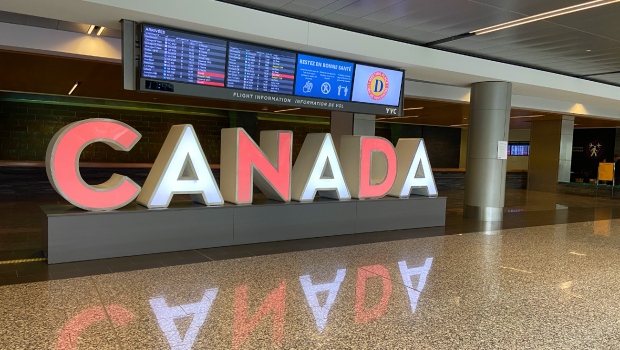 CALGARY — Health and safety concerns are growing for passengers arriving at the Calgary International Airport from abroad.

Lineups at customs have been overflowing during peak hours after Canadian Prime Minister Justin Trudeau and U.S. President, Donald Trump mutually agreed to ban non-essential travel across their borders Wednesday.

Traffic Wednesday morning was relatively steady at Calgary’s arrival terminal, now one of just four terminals in the entire country — aside from Toronto, Vancouver and Montreal — accepting international travellers.

Kristie Aube just arrived in Calgary from Phoenix with her husband and was worried she wouldn’t get a flight back home in time.

“It’s definitely stressful, we wanted to get home, we were worried about our kids and friends — it was a bit scary,” she said.

“The people at customs were amazing through, it’s such a slick process and they’re all doing such an amazing job.”

Although, some passengers were concerned for their health and safety.

Aaron Polnick tweeted this video early Wednesday as he went through customs in Calgary.

Some passengers, who wish not to be named, also confirmed to CTV Calgary there was a lack of hand sanitizers, and many passengers from multiple flights were touching screens.

“I had to use my own sanitizer — I did notice that when I got off the plane and had nothing to wash my hands,” she said.

The 21-year-old was on the beach in Galapagos just this past Saturday, but was told to leave Ecuador immediately as fewer flights were coming into that country.

Luckily, a study abroad advisor with the U of C managed to get her a last-minute flight.

“So for now I’ll be in self isolation — my father is high-risk so I contacted the U of C and they’ve been very accommodating in offering me a place to stay on campus while I study so I don’t have to go home and possibly infect my family.”

Flattening the curve is now the top priority of staff at Calgary’s airport.

Reid Fiest with the The Calgary Airport Authority (CAA) notes that his team is working with airline partners, the Public Health Agency of Canada (PHAC) and staff with the Canada Border Services Agency (CBSA).

Fiest adds that anyone showing symptoms when getting off a flight will be placed into a secondary isolation area.

“When it comes to kiosks we are regularly cleaning those as well and trying to keep the whole area as clean as possible,” he said.

“We’re doubling our cleaning of all those possible areas and washrooms — we know that’s going to be an area we need to give a lot of attention, especially high touch points.”

Earlier this week, the CAO announced the COVID-19 pandemic will likely result in an impact of about five million fewer passengers travelling through Calgary compared to 2019 — about a 30 per cent decrease.

That same report also showed an estimated 25 per cent decrease in revenue — about $100 million less on a $450 million budget.

“The situation is so unprecedented and dynamic that those numbers will likely change,” he said.

“We’re here to support the public health response first — there are financial impacts, but all of that is secondary.”