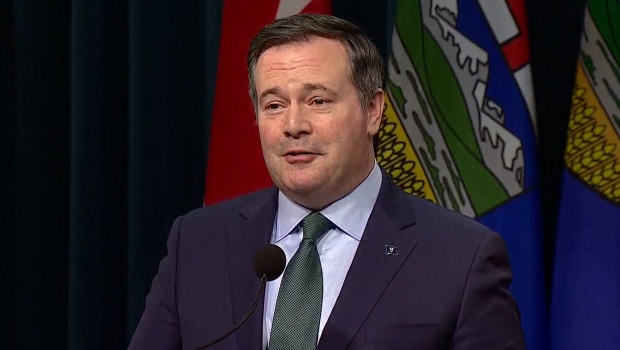 CALGARY — A ground-breaking deal to create the first Canada-to-Mexico rail network will not negatively impact jobs in Calgary or anywhere in Alberta, Jason Kenney says.

Calgary-based Canadian Pacific (CP) announced it was buying Kansas City Southern for $25 billion on Sunday in a cash-and-shares deal to create the first rail network from Canada through the U.S. to Mexico.

It’s the biggest merger and acquisition yet in 2021.

The Alberta premier posted reaction to the $25 billion deal on Twitter, calling it “one of the largest ever foreign acquisitions by a Canadian company.”

He also said he’s spoken with CP executives who have reassured him that there will be no job losses at its Calgary headquarters or anywhere else across its network as a result of the deal.

“The combined rail network will give CP direct access to the US Gulf Coast & beyond, allowing it seamlessly to transport Alberta energy directly to Gulf Coast refineries, improving the economics of crude by rail,” he wrote.

“This transaction means that Calgary will now be global headquarters of North America’s only fully-integrated continental railway, with 20,000 employees.”

The transaction has yet to be approved, but Kenney says it will be good for the province if it is.

“This transaction will be good news for Alberta’s economy, expanding one of our largest employers while increasing shipping access to our largest export customers,” he said.

Calgary-based Canadian Pacific is Canada’s No. 2 railroad operator, behind Canadian National Railway Co Ltd, with a market value of $50.6 billion.

It owns and operates a transcontinental freight railway in Canada and the United States. Grain haulage is the company’s biggest revenue driver, accounting for about 58% of bulk revenue and about 24% of total freight revenue in 2020.

Kansas City Southern has domestic and international rail operations in North America, focused on the north-south freight corridor connecting commercial and industrial markets in the central United States with industrial cities in Mexico.

Canadian Pacific’s latest attempt to expand its U.S. business comes after it dropped a hostile $28.4 billion bid for Norfolk Southern Corp in April 2016. Canadian Pacific’s merger talks with CSX Corp, which owns a large network across the eastern United States, failed in 2014.

(With files from Reuters)