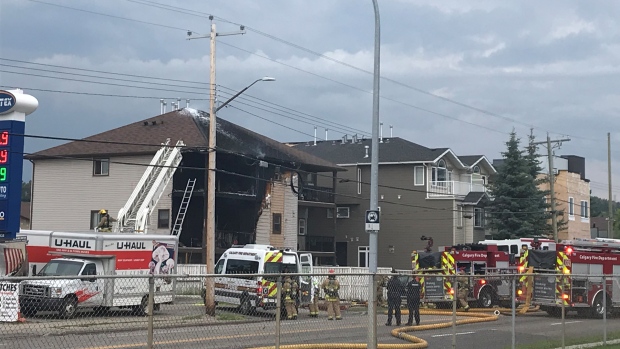 About 30 firefighters responded to calls about a barbecue fire on one of the back balconies.

“There was heavy flame and smoke showing that could be seen for blocks,” said Central District Chief Innes Fraser.

Fraser said the residents who were in the building when the fire broke out had all left the building safely before crews arrived. Firefighters were able to rescue several pets from the building.

No injuries were reported.

None of the residents will be allowed back in the building for at least 24 hours.

Investigators are still working to determine if a barbecue was the actual cause of the fire.

Fraser said Saturday was a busy day for the fire department. He has a message for Calgarians this long weekend.

“With the warm weather, people are out, people are barbecuing, and forgetting something they wouldn’t normally forget, so I want to remind everyone be careful when you have a barbecue or a fire pit. If you’re floating on the river, on the river today we’ve had a number of rescues, please be careful on the river, and I always say have working smoke alarms in your home, it’ll save lives.”