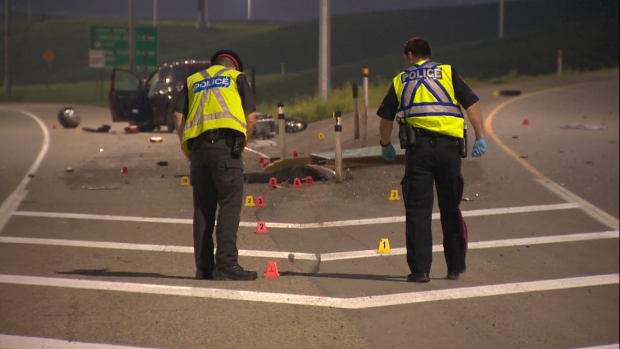 CALGARY — A motorcyclist is dead after being struck by a minivan in the city’s southeast early Friday morning.

Calgary Police say the man was found dead just after midnight when crews arrived in the northbound lanes of Deerfoot Trail, just north of 212 Ave southeast.

According to Sgt. Colin Foster with the Calgary Police Service traffic unit, the motorcycle had been stopped in the gore — a section of the highway painted in a chevron pattern that is not meant for driving.

“It’s like most of our crashes. Unfortunately it’s usually a sequence of events, where sometimes it’s the wrong place at the wrong time. That tends to be the majority of our collisions.”

Foster says the Toyota Sienna minivan went through the gore that separates the exit lanes to 212 Avenue, striking the motorcyclist.

EMS paramedics tell CTV News the victim was a man in his 50s.

The driver of the minivan, a man in his 30s, was sent to hospital with minor injuries.

The passengers, a woman and four children, were not injured but taken to hospital as a precaution. It’s believed the occupants of the minivan are a family.

Northbound Deerfoot Trail was closed between Dunbow Road and 212 Avenue for several hours but reopened shortly before 6 a.m.