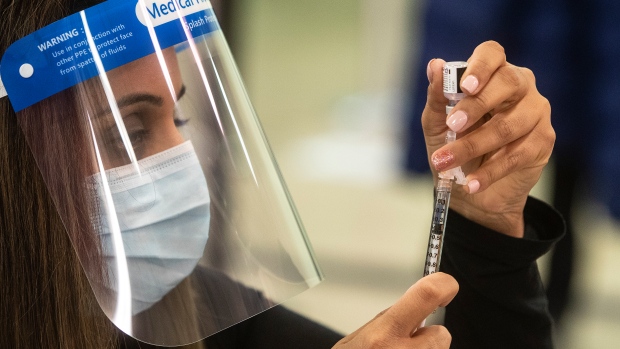 EDMONTON — The province said Friday that about 83 per cent of residents living in long-term care and designated supportive living facilities in Alberta have been fully immunized against COVID-19.

The latest numbers show 45,910 people have received two doses, among them approximately 23,600 who live in long-term and designated supportive living homes.

“That’s huge news because that group characteristically has really driven a lot of the deaths especially and some of the hospitalizations as well,” infectious disease expert Dr. Lynora Saxinger told CTV News Edmonton.

On Thursday, hospitalizations dropped below 400 for the first time since Nov. 23.

Saxinger suspects vaccinating those most vulnerable to the virus has helped.

“We know that even a few – a couple few weeks after the first dose – there’s pretty significant protection that starts to build and so quite a few people now are some weeks out from that initial dose,” she said.

Still, the vast majority of the Canadian population hasn’t had access to vaccines.

Alberta is still in Phase 1 of the rollout, where certain health-care workers, respiratory therapists, paramedics as well as staff and residents in long-term and designated supportive facilities have been offered vaccines.

According to the province’s website, Phase 1B will start in February but it also states the timeline is subject to change depending on supply.

“Israel, for example, is a success story where they vaccinated the vast majority of older people very, very quickly and that’s resulted in a huge change in what’s happening in the community like the hospitalizations, the cases, everything’s dropping in that older age group,” said Saxinger.

“But then when you look at what happens in their hospital data, they actually have a much higher proportion of young people in hospital right now because the infection is still spreading in those groups.”

Saxinger said that’s why it’s important to keep restrictions in place during the vaccine rollout and not to let new variants “take hold.”

“We are on the right path. We are not out of the woods at all.”

“That’s part of the reason why we can say with such confidence that everyone who wants a vaccine in Canada will get one by the end of September,” said Trudeau at a news conference.

Trudeau said the feds will share the schedule with provinces and territories “so they can prepare to get all those doses into peoples’ arms.”

He also announced Canada has purchased four million additional doses of Moderna vaccine, which will be arriving in the summer.