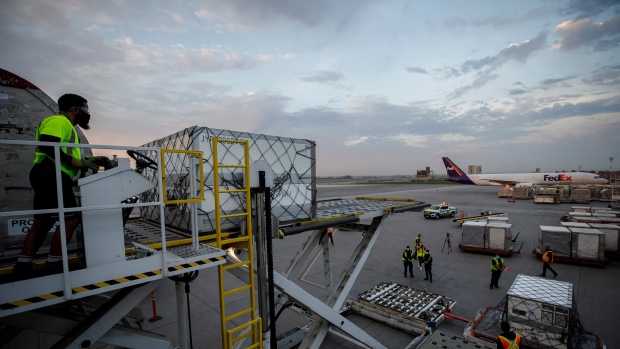 OTTAWA — While Moderna has millions of promised COVID-19 vaccine doses outstanding and no future shipments confirmed, the federal government says it is confident that the company will meet its end of quarter commitments.

In an interview on CTV’s Question Period with Evan Solomon, Intergovernmental Affairs Minister Dominic LeBlanc said that Moderna has given “assurances” that shipments will continue to land and the company has not yet indicated it’ll be unable to keep to its end-of-June targets.

To date Canada has received and distributed just over 4.5 million Moderna shots, of a total commitment by end of June for between 10.3 and 12.3 million doses. That leaves at least 5.8 million doses outstanding with just over five weeks to go before Canada Day, and no future locked-in deliveries.

“It’s important to say that those doses… they haven’t disappeared,” LeBlanc said. “The company’s not saying they’re not going to deliver them to Canada.”

He said the issue is that the government doesn’t know what days, or in what size batches, future shipments will be sent.

The most current indication of when the next batch will arrive, came from Deputy Minister for Public Services and Procurement Canada Bill Matthews at a Friday House of Commons Health Committee meeting.

There, Matthews said that the government is “optimistic that we will get the next shipment of Moderna the first week of June,” and officials are expecting to have the full schedule for June and July within “the next week or so.”

On Thursday, the military general leading Canada’s vaccine rollout Brig.-Gen. Krista Brodie said that Canada was “on track to deliver more than 40 million doses to provinces and territories by the end of June.”

However, Brodie’s commitment appeared at odds with a previously stated commitment from Procurement Minister Anita Anand that Canada was set to receive between 48 and 50 million doses of approved vaccines by the end of June.

While the difference in confirmed and promised doses also includes ongoing uncertainties with future deliveries of the AstraZeneca and Johnson & Johnson vaccines, Moderna has the largest outstanding commitment of doses of what the government had planned on receiving by the end of June.

Asked if the potential delay or shortage will hinder reopening plans by not having as many doses available as anticipated, LeBlanc said “we don’t think so,” noting that the provinces and territories have been booking appointments based off of confirmed shipment figures.

Now a months-long issue, Moderna has had “challenges… around their supply chain, around quality assurance processes,” said LeBlanc. The company has said it’s been working to scale-up its manufacturing capacity to meet the global demand. Pfizer did the same over the winter but has since been reliably sending regular and sizable shipments of its COVID-19 vaccine to Canada.

The government continues to say it’s working with Moderna to shore up coming shipments to better help the provinces and territories plan for when batches will land.

And according to LeBlanc, Procurement Minister Anita Anand will be having a “high-level conversation” with the pharmaceutical giant this coming Tuesday, “to again press them for more visibility and better information on the delivery dates.”

In a statement to CTV News, General Manager Canada for Moderna Inc. Patricia Gauthier said that the company: “continues to scale up vaccine manufacturing and remains fully focused on delivering vaccines to customers in Canada and around the world.”

While not commenting directly on the progress of the Q2 commitment, Gauthier said Moderna is “working towards achieving our vaccine delivery commitments for June.”

“We’re reassured and confident… Canada will get all the doses that we need to ensure every Canadian can have at least a first dose by the end of June. And then of course, be fully vaccinated by the end of September,” LeBlanc said.

Moderna is expected to “become the workhorse” of Canada’s vaccination effort over the summer, Matthews told MPs on Friday.

Also during Friday’s meeting, President of the Public Health Agency of Canada (PHAC) Iain Stewart offered new projections on when Canada may hit key markers in the push towards fully vaccinating everyone who wants to be.

Stewart said that PHAC anticipates 20 per cent of Canadians to be fully vaccinated by “late June,” and that by “the back end of July, or August” 50 per cent of the population should have received their second dose.