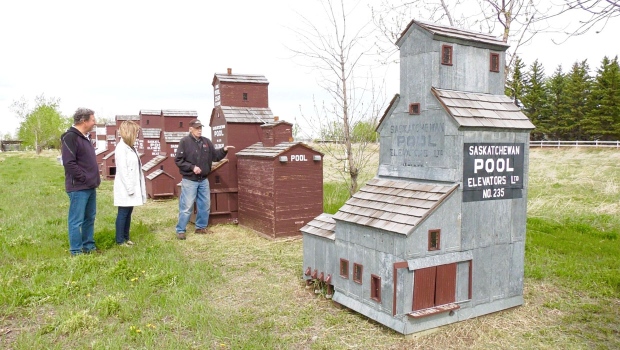 CALGARY — A love of grain elevators started at a young age for 91-year-old Einar Franson, but the passion continues to this day.

He remembers what they meant to farmers in Western Canada.

“It was the centre of the community,” said Franson. “If there was a card party or a tea or any political party meeting or something, they would meet in the office of the elevator.”

He’s constructed 51 replicas of the iconic prairie towers since he retired in 1985, and 24 of them measure in at around two metres tall.

“I can’t lift a piece of wood without think what can I do with it,” said Franson. “I’m old enough to remember the ‘Dirty Thirties’ when times at that time were damn tough I’ll tell you.”

His youngest daughter, Gaylene Merkel, helped him research some of the grain elevators he wanted to recreate. For a few he had detailed drawings, but not for others.

“I didn’t have any blue prints or anything, it was just the photograph that I had taken of the elevators,” said Franson.

The replicas have been displayed on Franson’s property east of High River for years, but now he’s moving and can’t take them with him.

Merkel posted 17 of the remaining elevators on her Facebook page for sale at $1,500 each, or best offer. She says she had no idea what she was in for.

“I had so many calls and messages and texts about these elevators I had to take it off Facebook because it was too crazy,” said Merkel.

People were sharing stories about their childhood memories of growing up around grain elevators with her, and in less than two days, she saw her posting shared more than a thousand times.

“My oldest daughter phoned papa and said, ‘I don’t know if you realize this but you’ve gone viral’,” Merkel said. “He didn’t know what that meant so Katelyn had to explain what viral meant.”

After reading the warm messages Franson decided to give the elevators away rather than sell them.

“I’m really happy that he decided to give them away,” said Ross, Merkel’s husband and Franson’s son-in-law. “Because when you have a passion it’s hard to put a price on that so the fact he knows they’re going to be given to people with the same passion is probably more valuable.”

“I’m just so proud of my dad for gifting these elevators and people that really wanted an elevator are getting an elevator,” said Merkel. “I’m just so happy that it’s going to places where people will take care of them and dad’s legacy will live on.”

Franson says he’s disappointed that many youth he runs into today don’t know anything about grain elevators that were once so important to prairie farm families. He started a conversation with a person at the post office recently about them.