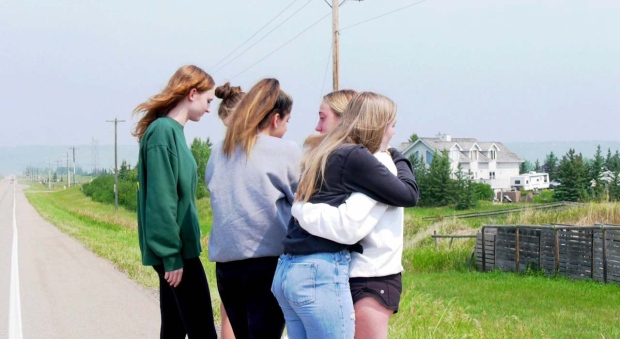 CALGARY — A memorial continues to grow along Range Road 32, at the scene of a deadly, Thursday morning car crash that claimed the lives of two teenage girls and sent two others to hospital.

Aiden Kalin, a Grade 11 student at Springbank Community High School, stopped by to mourn the loss of his friends on Friday.

“I haven’t really let it sink in yet. It’s so much. It’s more than one death,” said the distraught teen.

“I was super close to the Nicolettis and not so much to her friends, but we still see each other in the hallway and say hi and give hugs.”

CTV news has learned the two teenagers who died were Daniela Nicoletti and Tyler Anne. Daniela’s older sister, Giulia, and their friend Kaela Leier were taken to the Foothills hospital in critical, life-threatening condition.

All four were in Grade 11 at Springbank Community High School.

“They were always so nice. They’d ask you how you were and give you a compliment. They were just really genuine people,” said Kate Davies, a friend and classmate of the teens.

Cochrane RCMP were deployed to Range Road 32, near Township Road 250 just after 12:30 a.m. on Thursday after reports of a single vehicle crash.

Cpl. Troy Savinkoff says the driver lost control and the vehicle went off the road and rolled before stopping on a rural property.

“Two of the occupants of the vehicle were ejected and unfortunately those two girls were killed, and the other two remain in serious condition in the hospital right now,” said Savinkoff.

Davies and a handful of other friends stopped by the memorial Friday morning to lay down flowers.

“They were such sweet and beautiful girls and there was never a time that I would pass them in the hallway and they wouldn’t compliment you. They were just really sweet,” added Amira Moustapha.

Springbank Community High School opened on Friday to allow students and the community to grieve and talk about the events that happened.

Cochrane RCMP is still trying to determine a cause for the crash and say it could take more than a month before more details are known. Cpl. Savinkoff says investigators will be examining every possibility.

In the meantime, they are asking the public or witnesses of the crash to come forward if they have information.

“Things we like to know specifically are where these girls may have been exactly prior to the incident itself and also if there were any other occupants in that vehicle prior to the collision,” said Savinkoff.

While friends and family wait for details of what happened, they are leaning on each other for support.

“Everybody is constantly checking up on everybody because it’s just a small community,” said Davies.

“Everybody is coming together and trying to understand and be there for everyone.”