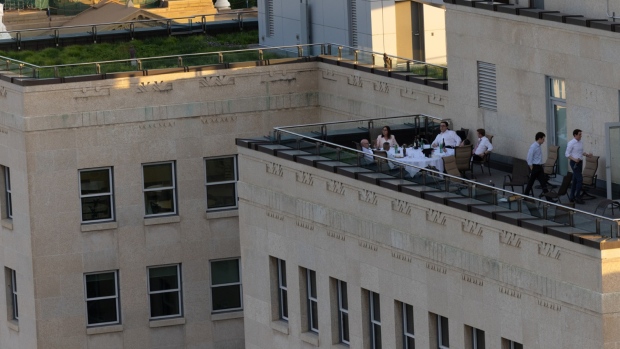 EDMONTON — Alberta’s premier apologized Monday for breaking his own government’s public health measures during an evening meal with ministers atop the federal building in Edmonton known as Sky Palace.

“For the past 16 months, I have tried hard to observe the public health rules. I thought it’s important for me to lead by example, but I have to admit, I haven’t always done that perfectly. I can think of many cases where I’ve been within two metres of people and that I’m sure has been the case for the past 16 months for pretty much everybody in Alberta,” Jason Kenney commented during a news conference.

Saying he wanted to address something that had become “a real controversy in recent days,” Kenney explained he ordered takeout for the June 1 supper on the deck outside the premier’s office, expecting it to be a lengthy meeting with the ministers of health, finance, and environment, as well as staff.

“We took precautions to do it in a distanced way, trying to observe the rules. In fact, we set up four continuous tables and spaced chairs out. We’ve actually gone up and measured the chairs since this became a controversy and apparently four of us were two metres or more between each other but two of those chairs were less than two metres distance, and there’s no doubt that over the course of the meeting, people came within the two metre distance,” he said.

Kenney continued, “But it’s clear that at some points in that evening we were not all distanced form one another by two metres and I truly regret that. I take full responsibility for this… We have to set a higher example, a higher threshold for conduct, and so I want sincerely to apologize to my colleagues and to Albertans for letting you down.”

‘ONLY SORRY ALBERTANS ARE HAVING NONE OF IT’: NDP

He made the comments during an announcement of the province’s plan to hold a referendum on Alberta pursuing the removal of equalization program from Canada’s constitution.

It was his first public appearance since the long-range photos were delivered anonymously to media outlets on June 2.

Two days later in the legislature, Kenney would refuse to admit to breaking COVID-19 restrictions and instead call the business dinner “fully rule compliant.”

At least two members of Kenney’s cabinet openly criticized him and called for an apology.

Independent MLA Todd Loewen, a former United Conservative member who was kicked out of the party for criticizing the government’s public health restrictions as heavy handed, announced Monday his intent to raise a question of privilege on the matter.

“Truth matters,” Loewen said in a statement on his Facebook page. “While I know we may have differences of opinion or may at times be mistaken with our words, one thing that nobody in this legislature should be doing is intentionally misleading the house – the people’s house – with dishonest statements.

“Perhaps the premier finds the COVID restrictions confusing or hard to follow,” he added. “But, he wrote them for the rest of us.”

The Alberta NDP said it planned to weigh in on the point, and demand another apology from the premier in question period for gaslighting Albertans.

“He did lie in the House. He said he didn’t break the rules when it was very clear to anybody looking at the pictures that that’s what he had done, and yet he has claimed repeatedly in the House he did not,” NDP and Official Opposition Leader Rachel Notley said Monday afternoon.

She called his comments merely an attempt at an apology.

“He’s not sorry he mocked our house and he lied to the people inside of it. He’s only sorry Albertans are having none of it.”

Notley added that the premier “cannot be trusted.”

“He’s lost the faith of Albertans as a result,” she said.

Of the meal and whiskey – which he said had been gifted – later that day, Kenney said on Monday: “If anything, I thought it’s a positive thing to show the openness of Phase 1 of the Open for Summer plan with the social gatherings of up to 10 people.”

He promised to learn from the incident and not participate in any other social gatherings until Stage 3 so as “to avoid any possible mistakes or misunderstandings.”

But Brian Jean – the last leader of Alberta’s Wildrose Party, and over whom Kenney won UCP leadership when the Wildrose and Progressive Conservative parties merged in 2019 – said Kenney should resign.

In a public statement, he called on the premier to step down “for the good of the party we created and the good of Alberta,” or else the NDP would regain popular vote.

Kenney responded: “He’s been saying that for the better part of two years, so that’s not really news.”

To start the press conference, Kenney announced he would introduce a motion to debate a potential referendum question on equalization.

Equalization is the federal government’s transfer program that ensures fiscal imbalances between Canadian provinces are addressed based on estimates of province’s abilities to generate tax revenues.

Kenney said the goal is to ask Albertans for their views on whether they believe the principle of equalization payments be struck from Canada’s constitution.

“Albertans elected this government to get a fair deal for them,” Kenney said. “That’s exactly what this referendum is about.”

The purpose of the program, which is enshrined within the constitution, was to guarantee comparable levels of public services offered across the country.

“For too long, Albertans have been forced to subsidize public services in other parts of the country where politicians have been trying to block our pipelines and impair our vital economic interests, even during times of great economic hardship for us,” he added.

The legislature will consider the motion and if the assembly passes it, cabinet will need the lieutenant-governor to order the referendum.

Notley said that while Albertans have “significant frustrations” with the equalization program, Kenney’s approach to abolishing equalization is a false promise.

“Jason Kenney has no ability to deliver on the promise of removing (the equalization) provision from the constitution in the event that Albertans vote for it,” she said.

“It is totally dishonest,” Notley added. “We have to ask if this referendum project is really about trying to solve the fiscal problem that concerns Albertans.”