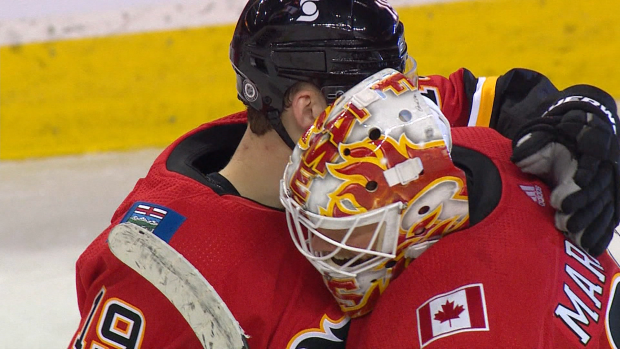 CALGARY — Johnny Gaudreau scored twice for the Calgary Flames in a 5-2 win Saturday over the visiting Montreal Canadiens.

Milan Lucic, Brett Ritchie and Rasmus Andersson, with an empty-net goal, also scored for the Flames (21-23-3), who beat Montreal for the second time in as many days following a 3-2 win Friday.

The Canadiens (20-17-9) hold down the fourth and final playoff spot in the NHL’s North Division. Montreal is four points up on Calgary with a game in hand.

The Flames are at home to the Habs again Monday.

Derek Ryan had two assists for the Flames. Calgary starter Jacob Markstrom made 30 saves for the win to improve to 6-1 against Montreal this season.

Tyler Toffoli and Nick Suzuki scored for the Canadiens with Erik Gustafsson assisting on both goals.

Canadians star goalie Carey Price is sidelined with a concussion and Jake Allen played Friday, so Cayden Primeau made his season debut and third career start in Montreal’s net.

The 21-year-old son of former NHLer Keith Primeau stopped 29 shots in the loss.

Calgary leads the nine-game season series against Montreal 6-2 ahead of Monday’s finale.

The Flames need three regulation wins in the series to improve their odds of taking the Canadiens’ playoff spot.

Calgary ended up playing five defencemen Saturday after Noah Hanifin left the game early in the first period and did not return.

He went down hard tangling with Montreal’s Corey Perry along the boards. Hanifin’s left leg bent awkwardly and his shoulder and head made contact with the ice as he went down.

Calgary led 4-2 on Ritchie’s goal at 4:41 of the third period when Montreal turned the puck over in the neutral zone.

Ryan dished to Ritchie on a two-on-one for the big forward to collect his third goal of the season.

The Flames took three straight penalties in the second period and Montreal scored on the third at 18:03.

After a Sean Monahan short-handed rush, the Canadiens scored going the other way with Toffoli potting a rebound for his team-leading 24th goal on his 29th birthday.

Gaudreau scored his second of the night on a hustling effort by Andrew Mangiapane to make it 3-1 for the hosts.

Mangiapane retrieved a puck that got away from Canadiens defender Jeff Petry at the boards and put a backhand pass on Gaudreau’s stick for a tap-in at 5:31 of the second period.

Calgary took a 2-1 lead on Lucic’s goal at 2:16. Ryan won the offensive draw and sent the puck back to the big winger to beat Primeau with a shot through traffic.

Gaudreau drew the hosts even with 31 seconds remaining in the opening period on a stretch pass from Chris Tanev. Gaudreau scored his 16th of the season with a wrist shot far corner.

Suzuki scored his ninth getting inside position and backhanding his own rebound by Markstrom at 11:32.

This report by The Canadian Press was first published April 24, 2021