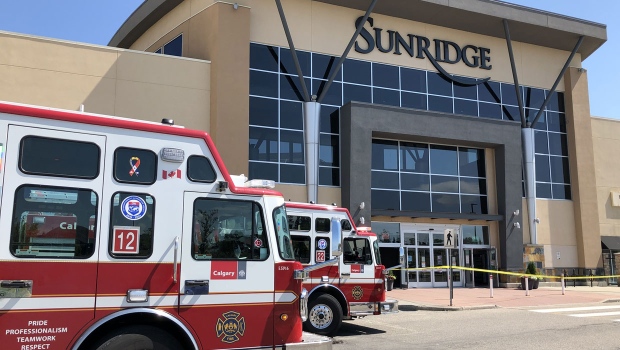 CALGARY — Pepper spray and a smoke bomb were set off by a group of assailants that ended up robbing a jewelry store inside a northeast Calgary mall Saturday.

Calgary police were called to Sunridge Mall on 36 Street N.E. for reports of a commercial robbery at about 1:30 p.m.

Officials say the business, Paris Jewellers, had been targeted by a group of unknown suspects.

Additional calls to the fire department and EMS were made after it appeared the thieves released pepper spray and even a smoke bomb inside the business.

Fire crews initially believed the incident was some sort of fire because of the thick haze, but found no flames and quickly realized it was caused by some sort of substance. As a result, the entire mall was evacuated and closed off.

The CFD, along with EMS, assessed about 20 patients at the scene and one adult male was taken to hospital in non-life threatening condition.

No one else appears to have been hurt in the incident at the store.

Officials say it could be hours before the mall is cleared of the substance and decontaminated because it managed to get into the facility’s ventilation system. It’s unlikely it will reopen before the end of day Saturday.

Calgary police say there is no information on any suspects at this time, but they are reviewing CCTV from a number of other stores to gather evidence.

There is no confirmation that the robbers were armed with anything else other than the pepper spray and smoke bomb, but CPS says that will form part of their investigation.

The shopping mall remains blocked off.