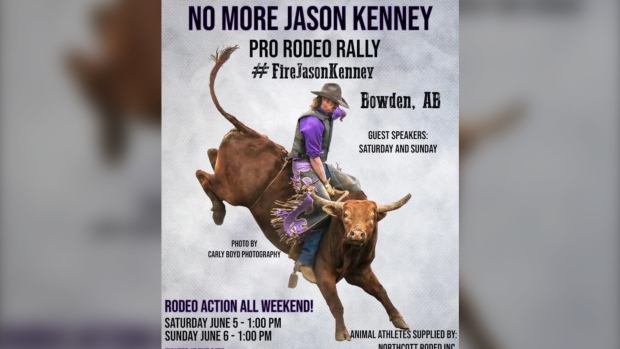 CALGARY — An injunction has been granted against a ‘No More Jason Kenney Rodeo Rally’ planned near Bowden, Alta.

The rodeo and rally are scheduled to take place June 5 and 6, with Northcott Rodeo Inc. supplying the animals, but on Friday morning, Justice John Rooke granted the motion against the weekend events, as long as public health orders remain in place.

Rooke said terms of the injunction will be released by noon Friday.

A post on social media says the specific location for the rodeo is to be revealed on Friday afternoon.

Guest speakers are also scheduled for both days. A poster distributed on social media says the event is sanctioned by World of Rodeo Canada.

Thousands of people attended a No More Lockdowns Rodeo Rally in a vacant lot near Bowden in early May, an event Kenney later condemned as being unsafe.