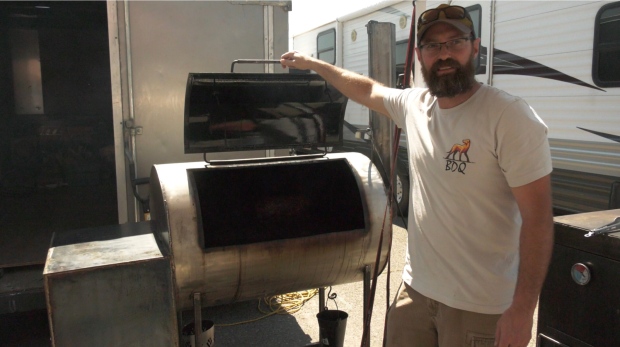 LETHBRIDGE — The meats are smokin’ and the grills are lit down at Exhibition Park in Lethbridge.

Barbecue masters from across Alberta have made their way to Lethbridge for the inaugural ‘Smoke, Wind and Fire’ competition.

It’s the first event put out by the Kansas City Barbecue Society since COVID-19 restrictions lifted, and the people down at ex park couldn’t be more excited.

“This event, in its inaugural year, has been an absolute success,” said Mike Warkentin, CEO for Lethbridge & District Exhibition.

“We’re full in our masters series category for what we expected and we’ve got twenty four teams competing today in our backyard competition.”

The backyard competition is made up of amateur grill cooks from across the province looking to prove they’re the best of the BBQ.

The winner, which will be chosen on July 10, will win bragging rights, a cash prize, a new smoker with accessories worth up to $1,300 and much more.

The second competition, the Master Series, will take place on July 11, with the winner there taking home similar prizes.

It’s not all about the competition though.

Chef’s John Jackson and Connie Desousa, co-owners of the Char Restaurant Group in Calgary, also came down, but not to compete.

They held demonstrations throughout the day, showing others new and exciting ways to cook their meat.

They handed out food samples of their charcuterie from their restaurants, as well as face bacon; smoked meat from a cooked pig’s face.

Jackson biked down to Lethbridge on Thursday to prep for the event and was pumped to see what Lethbridge cooking is all about.

“It’s about taste of place , and so much of that comes from south of Calgary in the Lethbridge area,” he told CTV News.

“Everything from the farms, the ranches, the artisan producers, I think this is just a great showcase of all of that.”

For their main demonstration, Desousa and Jackson showed the crowd how to properly debone a pig head.

Desousa, who was also a finalist on Master Chef Canada, is able to do this in less than 50 seconds, a world record.

However, they decided to slow it down a bit to show one Lethbridge chef how it’s done.

“John and I have decided to just show Chef Devynn Bohn the ropes of how to debone a pig head,” said Desousa.

“She’s never done that before and we’re excited to teach Devynn, and teach the audience, how to do that.”

Devynn Bohn is the co-owner and pit master of Lethbridge’s own Hickory Street.

She is also competing in the competition and was honoured to learn from the best.

“It wasn’t as gross as I thought it was going to be, I survived just fine,” she said.

“It’s fun to learn at the hands of a master and somebody that knows what they’re doing, so it was really fun.”

In addition to ‘Smoke, Wind and Fire’, it’s also Street Machine weekend, so the classic cars were out and about at ex-park as well.

The event also featured a beer gardens as well as the Saturday Farmers’ Market in the South Pavilion.

Jackson and Desousa say they were excited to be included in such an amazing event.

“It’s been a great experience for us to really understand the culinary scene that’s blossoming here in Lethbridge,” said Jackson.

The event is free for anyone who wants to come down and they’re inviting everybody, young and old, to come and take in the amazing sights and smells.

For more information, you can visit the ‘Smoke, Wind & Fire’ website.