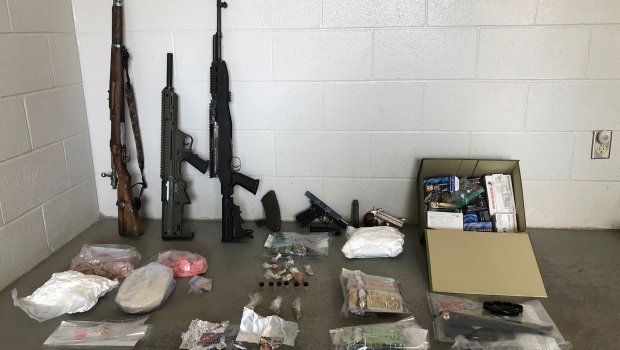 CALGARY — After Mounties were called to investigate a bullet fired into the basement suite of a central Alberta rental home, they discovered a cache of drugs, cash and several dangerous weapons.

Innisfail RCMP say they were called to respond to a home in Penhold, Alta. at 10:30 p.m. on June 7 for reports of a gunshot.

An investigation determined the bullet had been fired from the upstairs suite. Police attended the unit, arrested two male occupants and secured the location for further investigation once a warrant was secured.

The next day, police returned to the property and executed a search warrant.

During the search, they found:

An additional two kilograms of an unknown white powder was also seized and sent for analysis.

Two men, 21-year-old Amir Spiridonov and 19-year-old Alex Thiessen, both from Penhold, are both facing 25 charges:

“This is a significant size drug seizure and the RCMP remains fully committed in building safe communities and enforcing laws to their fullest extent in order to achieve this goal,” officials said in a release.

“Members of the public who suspect drug activity in their community are encouraged to contact their local RCMP detachment.”

Both men are scheduled to appear in Red Deer provincial court on June 10.