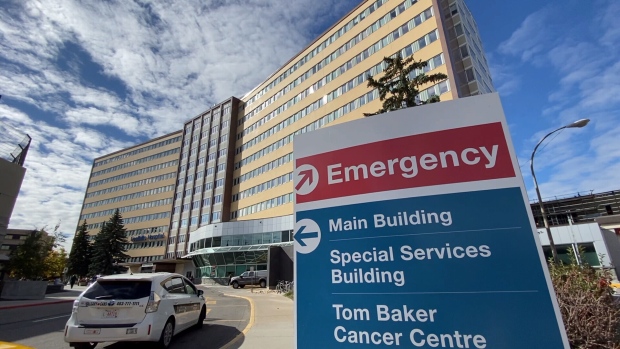 CALGARY — Sixteen patients at Calgary’s Foothills Medical Centre (FMC) have tested positive for the B.1.617.2 COVID-19 variant, otherwise known as the Delta variant that was first identified in India.

Two units are experiencing an outbreak of the Delta variant, Alberta Health Services (AHS) said in a statement, and teams are working to identify the source of infection.

“Management and caregivers on the affected units have been instructed to exercise extra vigilance with respect to PPE and fit-for-work screening,” reads the AHS statement.

“Temporarily restricting admissions to the units reduces the patient population on the affected units and allows for greater distancing and less sharing of high-contact spaces such as bathrooms,” AHS said.

According to Alberta Health, a first dose of an mRNA vaccine — like Pfizer and Moderna— offers 73 per cent protection against the alpha variant. That immunity is boosted to 91 per cent with a second dose.

“The emerging evidence is showing that one shot, although offers good protection, is not as strong against some of these variants,” infectious diseases expert Dr. Craig Jenne told CTV News Edmonton, pointing out variants are Alberta’s most dominant strains.

The B.1.617.2 variant was first confirmed in Alberta on April 8. Since then, the province has recorded 175 cases of the strain, 150 of those have been in the Calgary Zone.

With files from CTV Edmonton’s Amanda Anderson and Alex Antoneshyn