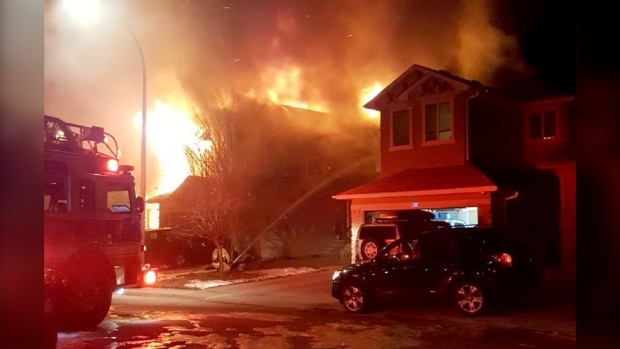 Firefighters responded shortly after 2 a.m. to the 100 block of Royal Oak Terrace N.W., for reports of two homes on fire.

Once crews arrived, a second alarm was called in for additional resources as neighbours say the flames were shooting three metres into the air.

Thick black smoke filled the air and embers eventually spread the fire to a third home, prompting an immediate evacuation of all residents in the area.

Yoon Ha spotted the blaze from across the street on his security camera and immediately woke up his family.

“I heard a snap, crackle and pop and we just saw the embers flying,” he said.

“The volatility of the wind wasn’t blowing consistently in one direction and ash was flying all over our house and our neighbours as well so that was a big concern.”

According to the Calgary Fire Department, three people were inside the original home that caught fire and were all able to get out safely.

“Wind really picked up right around the time the fire had started, the wind carried embers across the street and some decks caught on fire so that was the biggest issue for sure,” he said.

“About 19 people will be displaced, thankfully all of them had insurance and no one was injured.”

Calgary Emergency Management Agency (CEMA) is on scene to assist the displaced resident. A city bus was also called in to provide shelter for several people in the area.

At this time there is no word on the cause, but a fire investigator is on scene as crews will continue to minor for additional hotspots

Calgary fire say there was great support from all neighbours in the area and stressed the importance of working smoke alarms.

All indications are that each home had working smoke alarms at the time of the fire.