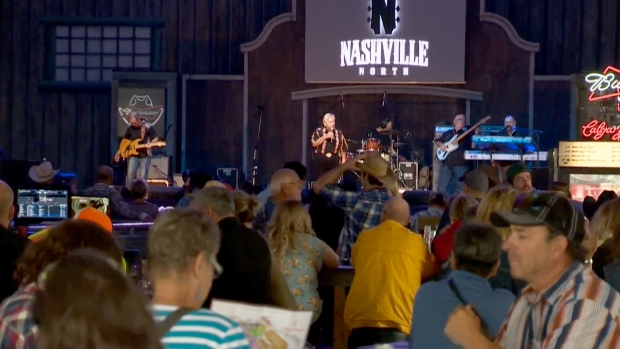 CALGARY — The Calgary Stampede is stomping on accusations that people can pay bribes to gain entry into the Nashville North live music venue.

Speculation on social media suggested you could pay $50 to have a rapid test result thrown out, or pay $100 to bypass testing and skip vaccine approval.

All guests wanting to enter Nashville North must produce a negative PCR test, or show proof of one dose of COVID-19 vaccine, received at least two weeks prior.

“For the proof of vaccination, we’re timing in at something like a minute and thirty seconds per transaction,” said  Calgary Stampede vice-president Jim Laurendeau.

“It’s thorough, but it’s efficient. The rapid testing program is more along the lines of 25 minutes.”

Laurendeau says the rumours about bribes are categorically false.

To test that, the Stampede says it has brought in third party auditors, and has 100 per cent confidence in the program it has in place.

“When the tests are on their way or known, then they will be called back to medical testing facility,” said Laurendeau.

“At that point they learn about results. If their results are positive, then they are then asked by the medical professionals also to proceed off the park and proceed home to contact AHS.”

Officials say 22,000 people have entered Nashville North so far during Stampede and 70 per cent have opted to use proof of vaccination. The rest have been tested.

Staff say there is a positivity rate of 0.05 per cent, or fewer than five people who have tested positive.