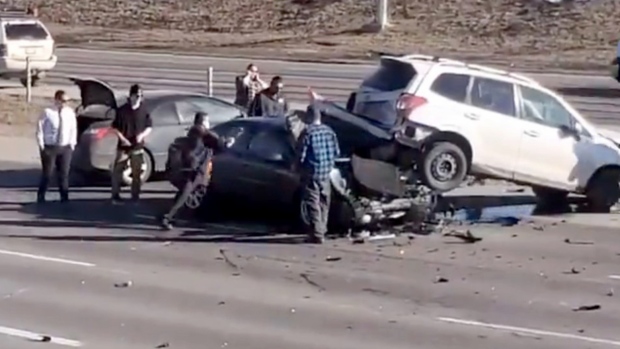 CALGARY — Emergency crews were busy Tuesday afternoon responding to two serious crashes within minutes of each other.

The first saw two vehicles collide at Macleod Trail and 94th Avenue S.E., sending one into a light standard. A female youth was rushed to Foothills hospital in serious, life-threatening condition. A male youth who was riding in the same vehicle was taken to hospital in stable condition.

A portion of Macleod Trail was closed while police investigated.

At about the same time, emergency crews were called to a serious crash on westbound Anderson Road between Elbow Drive and 14th Street S.W.

Video of the scene showed a black car became wedged under a white SUV. Bystanders could be seen smashing the passenger side window of the black car with an axe.

Police said one person was transported to hospital in stable condition.