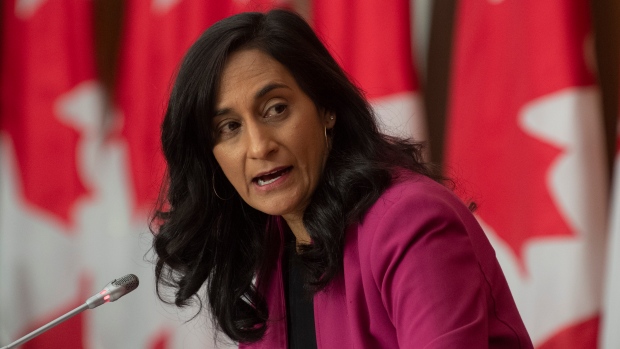 OTTAWA — As initial vaccinations with the newly approved Pfizer-BioNTech vaccine are set to begin in Canada this week, the federal procurement minister said the government is in talks with Moderna about receiving initial doses early.

“We are in touch with our suppliers every day, including Moderna, and we are pressing for early deliveries of the doses pending Health Canada regulatory approval,” said Procurement Minister Anita Anand in an interview with Evan Solomon on CTV’s Question Period.

“It’s impossible to put a timeframe on that right now, because Health Canada has an independent regulatory process, but we continue to work with our suppliers and base our shipments around that potential approval, which we hope is forthcoming,” she said.

Anand said that Health Canada has said suppliers can pre-position their orders, and so she’s raised this with all the potential vaccine suppliers Canada has signed deals with to see if it’s something they’d be interested, or able to do so.

Because the Pfizer vaccine has to be stored at extreme cold temperatures, that option hasn’t been pursued but Anand said because Moderna only requires storage at -20 C, “it’s a possibility.”

Moderna’s vaccine candidate is now the most advanced in Canada’s regulatory process, but there isn’t a date or estimate yet for when it may be approved. Because this vaccine does not require the same degree of cold storage, the logistical rollout of Moderna doses is expected to be less challenging and opens up the potential locations across the country where it can be administered.

If approved, it would be the first vaccine to be delivered using Canada’s contracted delivery plan through FedEx Express Canada to have doses shipped across the country.

On Dec. 4 the government announced it had updated its deal with Moderna to secure the delivery of an additional 20 million doses of its vaccine candidate “based on the best scientific data available to date, and on the recommendation of the Public Health Agency of Canada and the vaccine task force.”

The government exercised an option within their existing contract. Under that deal, Canada was planning to receive up to 56 million doses of its vaccine candidate, but had specifically locked in 20 million of those. That’s now doubled to 40 million.

Though of those, just two million Moderna doses are currently expected to land in Canada by the end of March 2021.

This week the federal government offered an update to the timeline for its national mass vaccination effort. The plan is to focus on priority groups between December and March 2021, begin vaccinating the general population in April, and have all Canadians who want the vaccine immunized by the end of next year, with one of the seven vaccines Canada has signed deals to secure.

Asked if it’s possible that the timeline could be accelerated, the minister cited the numerous risks associated with vaccine supply chains, and so for now the current time estimates remain the most likely.