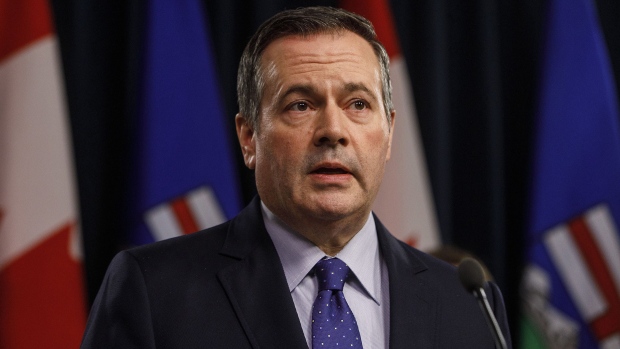 CALGARY — Premier Jason Kenney says a recent resurgence in energy prices is having an impact on Alberta’s bottom line but his government won’t be banking on high oil projections in Thursday’s provincial budget.

The premier said on Tuesday that Alberta’s deficit was on track to exceed $21 billion by the end of March, but a bump in energy prices is bringing it closer to $14 billion.

Still, Kenney stresses the government is dealing with several billion dollars less in revenue than it was banking on in last year’s budget due to a combination of the oil price wars, COVID-19 crisis and economic downfall.

He says it is no longer realistic to balance the books in the next two years and now is a time for government to invest in pandemic aid and economic recovery.

While the premier says he is optimistic about the recent climb in oil prices, his government won’t make the mistake of relying on high oil projections to try and get out of its deficit.

“Gosh knows I hope that is true but it would be irresponsible to plan for that,” he said.

“So, you’ll see quite conservative projections for commodity prices in Thursday’s budget and in fact slightly below the private sector forecasting average because we think that’s the prudent thing to do.”

The premier has already ruled out the idea of hiking or introducing new taxes to deal with Alberta’s revenue problem.

Alberta’s finance minister will deliver the budget in the Legislature on Thursday afternoon. It is usually accompanied by a throne speech from the premier to outline the government’s plans for the upcoming year but Kenney says that won’t happen.

He says the priority right now is the pandemic and says most bills being introduced this spring were already introduced last year but fell wayside due to the pandemic.

Kenny plans to deliver a throne speech in the fall.