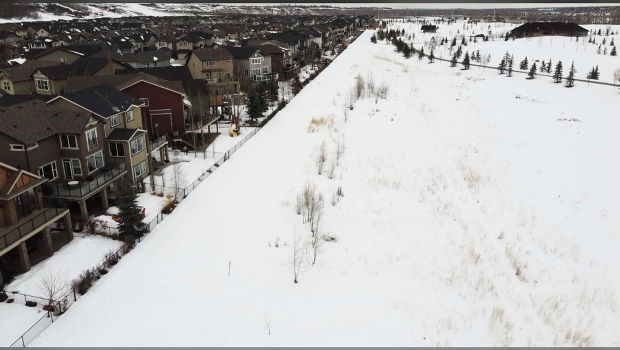 CALGARY — A new community proposal in southeast Calgary has nearby neighbours worried about flooding and calling for a development halt.

It’s yet to clear every city hall hurdle, but as it heads to a second reading on Monday, some residents and even the area councillor say it’s almost a “sure thing.”

And as that proposal advances, opposing voices are getting louder.

Nearby Chaparral Valley neighbours have a laundry list of concerns. Many would rather the area stay as an open green space or be used for habitat restoration.

What they don’t want is the proposal passed as-is.

“There goes the golf course view we paid for,” resident Wendy Henderson told CTV News. “We didn’t anticipate having houses 60 feet behind us. Ever.”

Henderson’s home is one of about a dozen that back on to the empty lot. They currently look out at the Blue Devil Golf Club, but the new community would obstruct that view.

But that’s not Henderson’s only problem with the site.

She’s also worried about access issues the increased density could create for existing residents, as there is currently only one artery in and out of the neighbourhood.

But most of all, Henderson, like many on her street, is worried about the risk of flooding.

The current site sits five metres higher than some existing homes, and though developers would level out some of the land, Chaparral Meadows would still be on higher ground.

The entire area is within the flood fringe of the Bow River, and after a close call in 2013, Henderson is worried about the next big flooding event.

“They’re effectively building an island behind us, and the low point is still in a flood plain,” she said. “That’s where we saw water from the last flood come into the valley.”

“Because this new community will be sitting a little bit higher than the current one, it will be a bit of an island and potentially it may divert water into Chaparral Valley,” community association president Anton Ovtchinnikov said.

WestCreek Developments is the company responsible for Chaparral Meadows. A spokesperson said Friday it has met all the standards of the proposal process thus far, and that more detailed studies on the site will happen in the near future.

“I wanted to leave it as an open area because I do believe that’s what makes the city so beautiful,” Demong said.

But he told CTV News he feels like he’s fighting somewhat of a losing battle.

“If there’s one thing you can absolutely guarantee in life and in city development, it’s that change is going to happen.”

But Henderson, Ovtchinnikov and dozens in Chaparral Valley say they aren’t done fighting.

“The residents believe with this new development, their concerns are not heard and the developer is just trying to jam as many homes (as possible) on this location,” Ovtchinnikov said. “All we are asking for is deferral of this issue for us to have further conversation with the developer and with city administration.”