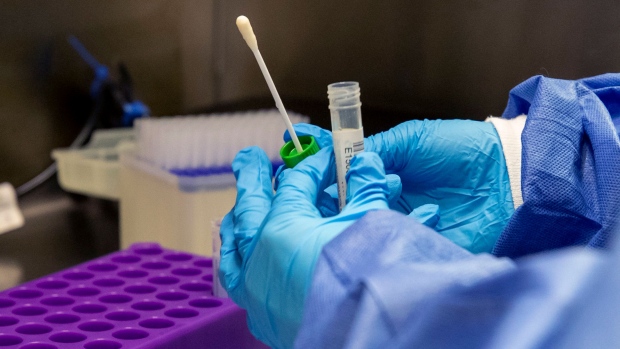 CALGARY — In the coming days, students and staff at two Calgary schools will be undergoing testing as part of a rapid testing pilot announced by the province Thursday.

The work will begin as early as next week, the province says.

“A testing team will be set up at two Calgary schools to screen students and staff who do not have symptoms,” LaGrange said Thursday. “They will offer the testing again the week after and may follow up with a third round of screening.”

The specific locations have not yet been selected, the province says, but the pilot is expected to last three weeks. The decision on which schools to be included will be up to Alberta Education and Alberta Health.

“We are one of the first provinces to run such a trial on site at schools and offer testing to the entire school population during the school day. This will make it easy for students and staff to get tested with little disruption to the school day as possible,” LaGrange said.

For those parents who are concerned about testing conducted on their children, LaGrange assures that the pilot program is voluntary.

Meanwhile, she is happy with the results of Alberta’s school re-entry plan that has allowed thousands of students to attend in-class learning with their peers.

“This pilot is part of our commitment to safely continue in-person learning. Every day a student is able to attend school in-person is a ‘win’ this pandemic. I’d like to thank all the teachers, principals and all school staff for their hard, hard work to provide as near normal a learning situation as possible this pandemic and I look forward to seeing the results of this pilot.”

RAPID TESTS HEADING TO OTHER BUSINESSES TOO

However, the province isn’t limiting the rollout of rapid test kits to just those two Calgary schools.

He also confirmed that rapid tests will be available for workers at High River’s Cargill meat processing plant.

Shandro said anyone who comes back with a positive result will still need to be tested using a regular PCR test, but that shouldn’t overshadow the importance of the rapid tests.

“Rapid tests mean we can find more people infected with COVID sooner, even when they don’t have symptoms. So we can get them into isolation sooner and reduce the spread of infection in our communities.”

Once complete, the school pilot program will provide Alberta Health with information about how it can be expanded to other schools in other areas of the province.

An announcement about the schools that will be part of the pilot will be made next week.