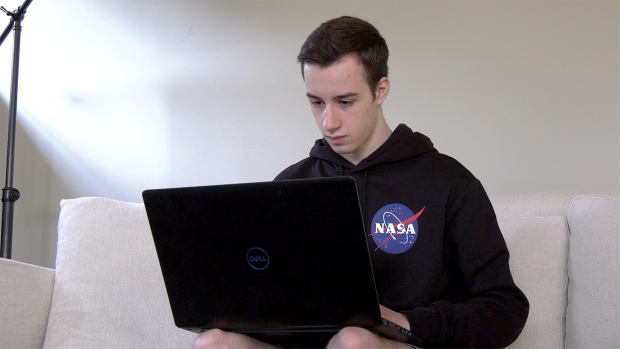 CALGARY — A passion for science and technology has landed a 17-year-old Calgarian on the doorstep of a legendary U.S. space program.

Alessandro Greco is no stranger to interning. Since grade nine, he’s been spending his summers with University of Calgary professors.

“I’ve always been trying to figure out how things worked and then in grade eight I started to get involved in robotics,” said Greco. “I was inspired by some of the NASA robotics scientists that worked there and what they were doing and it was really cool.”

He heard a NASA administrator speak at the Robotics World Championships in Houston and that piqued his interest. Greco was one of 800 grade 10 and 11 students who applied for the STEM Enhancement in Earth and Space Science (SEES) summer internship to be held at the University of Texas at Austin’s Center for Space Research.

274 students were accepted mostly from the U.S. but a handful from Europe and Greco from Canada.

“The goal of this NASA program is to get more students interested in STEM education and careers in science technology engineering and math,” said Margaret Baguio, the program manager of education and outreach.

Student interns are broken into groups of about five. It started in June and they will present their findings in August. Greco’s team will use data received from NASA’s Earth observing satellites as well as designing Mars habitats, lunar exploration and robotics.

“(We’re) using NASA satellite data and looking at different variables right now,” said Greco. “So we’re looking at vegetation and other types of land cover, urban environments, precipitation and other weather and trying to use machine learning to predict things.”

NASA subject matter experts from all areas of the organization speak to the interns so they can learn about the wide variety of careers at NASA and other space industries.

She says the program is in its sixth year and students who have gone through it are now working at companies like Facebook, Google, and Boeing and at the Kennedy Space Centre.

Greco is learning as much has he can to be ready for university.

“I’m hoping to get into some sort of engineering or programming or computer science-related field,” said Greco. “Going to university doing that and finding a job that involves some of these science related careers.”

In past years the interns have travelled to Houston and lived in the U of T dorms while working on NASA projects along with a visit to the Johnson Space Centre. But in 2020 and this year the program is only offered virtually.

“I do see the students becoming more tech savvy, stronger understanding of technology and a real engagement in environmental issues and that to me is very rewarding,” said Baguio.

The purpose of NASA’s Earth science program is to develop a scientific understanding of Earth’s system and its response to natural or human-induced changes with a goal to improve prediction of climate, weather and natural hazards.

Learn more about the program here:https://science.nasa.gov/learners