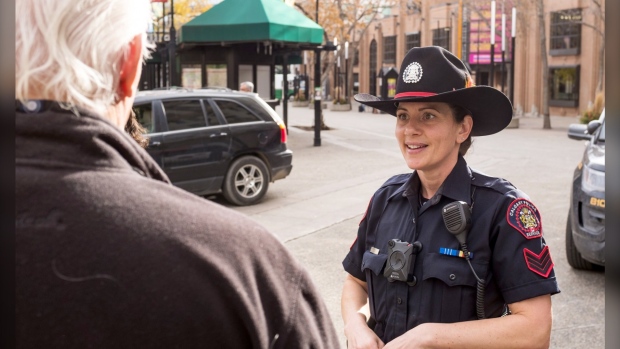 CALGARY — The use of body-worn cameras has resulted in an 11 per cent reduction in the number of times members had to use force beyond handcuffs and basic control, while also cutting in half the amount of timeit takes to investigate concerns about officer conduct.

That was the findings of a pair of reports released Tuesday evaluating the effectiveness of body-worn cameras as well ascameras mounted in police vehicles.

Body-worn cameras were deployed to all patrol and traffic section officers, as well as some frontline officers, in April 2019.

Cameras have been mounted in patrol cars since 2012.

The reports say 84 per cent of concerns raised about police conduct are now addressed in less than three months and 96 per cent are addressed within a year.

“Our service is the national leader when it comes to body-worn cameras and we know many agencies across Canada are now looking to us for guidance on how to use this tool,” said Chief Mark Neufeld in a statement.

“No question there has been a learning curve with this technology, but we are very pleased with the success so far and are fully committed to making the improvements needed to ensure continued success.”

The reports add a survey found 95 per cent of Calgarians support the use of body-worn cameras, and 94 per cent of officers with cameras use them regularly.

“Our service now records over 53,000 videos with body-worn cameras each month, not including the additional video captured by the in-car cameras,” read a statement.

Areas where improvement is needed were also identified, including:

“Many improvements are already underway to address the issues identified through the review, including issuing cameras to more officers, improving the policy and training and improving the public information available about the cameras,” said Neufeld.

The reports are available online or read them below.