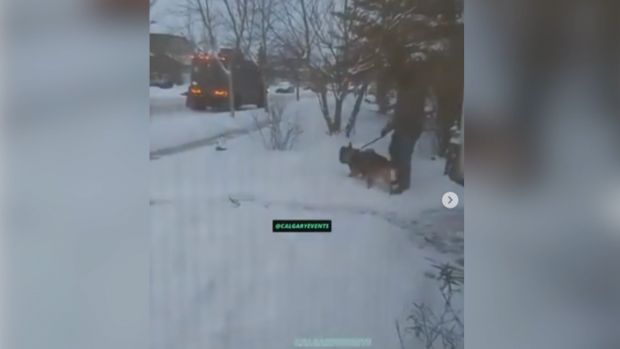 CALGARY — Officials with the Calgary Police Service say the actions of an officer who was recorded kicking a service dog were not acceptable or a standard method of training their K-9 unit uses.

The 20-second clip of the kick received plenty of backlash after it was posted to the Calgary Events social media pages on Wednesday.

The video, taken from inside a home, shows what appears to be members of the tactical unit walking off screen. The camera then pans over to reveal a handler and their canine partner.

The police dog is heard barking, then the officer is seen swinging their leg toward the rib cage or shoulder area of the dog.

“We’re aware of a video circulating on social media involving one of our Canine Unit members and his Police Service Dog (PSD).”

We’re aware of a video circulating on social media involving one of our Canine Unit members and his Police Service Dog (PSD). We are reviewing this incident and will release additional context tomorrow regarding the high-risk call this officer was on & what led to this incident.

CPS adds that they are reviewing the high-risk incident and will be providing additional information Thursday. Officials have not disclosed what prompted the initial police response, the date of the incident or where it occurred.