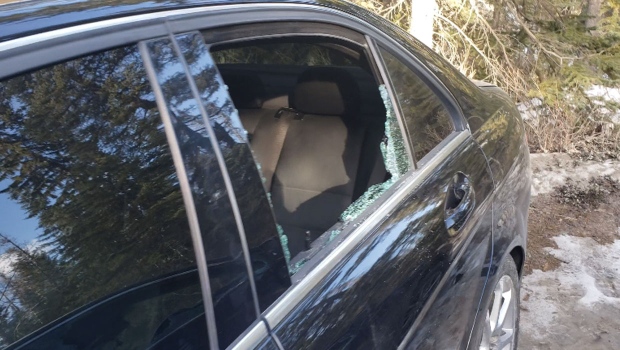 CALGARY — A Calgary man is upset after he says he fell victim to a trailhead smash-and-grab at B.C.’s Wapta Falls.

Omar Herzawy hiked to the falls near Golden with his sister on Wednesday.

But when he got back, he says the experience was “completely ruined.”

“After the hike, the first thing I noticed was the first two cars had smashed windows,” he told CTV News. “Then I saw my car.”

Herzawy says his Mercedes Benz had its back window broken and multiple items – including an expensive headset and camera accessories – were taken from the backseat.

RCMP were called. An officer says seven vehicles had damage.

Others at the trailhead reportedly had iPads and phones stolen.

“It’s a parking lot where there’s no cameras, not many people in the area and it’s right off the highway,” Herzawy said.

But there is a silver lining.

The Calgarian has a dash-cam that captured 20 seconds of footage while Herzawy was hiking. He believes it clearly shows the two thieves.

“The camera started recording as soon as they smashed my back window,” he said. “Maybe two or three seconds later, a female shows up in front of the camera. You can see her face pretty clearly and she’s wearing gloves.”

A man is also shown. He is also wearing gloves and appears to be holding a bag.

RCMP have been given the footage but were not able to confirm if any arrests have been made.

They remind hikers to not leave valuables behind in their vehicles while unattended.

“I don’t think I feel like going back to these areas again unless there’s surveillance cameras,” he said.