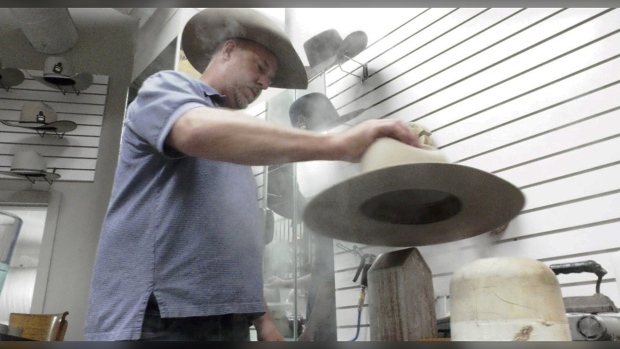 CALGARY — It’s been a tricky 17 months for the owners of Smithbilt Hats, after the Calgary Stampede, the catalyst of a large chunk of the company’s business, was cancelled completely in 2020.

This year however, with the event getting the green light from the provincial health authorities, sales of the famed wild western hatters spiked.

“It wasn’t quite what it has been in past years but it was definitely an improvement over the months before that,” said Brian Hanson, master hatter with Smithbilt Hats.

The Stampede said previously that success of the 2021 event shouldn’t be measured in attendance but rather how the municipal mindset changed this year.

“Above all else we learned this year that our experiences are the truest measure of success,” said CEO Dana Peers.

“As we celebrate the success, we are now seeing our national events begin to open in their own ways. Only weeks ago, they would not have considered it.”

Peers said the ball is rolling on plans for next year.

“We’ll take valued learnings from this year and build upon them.”

For Hanson’s iconic Smithbilt brand, the Stampede is a major catalyst for business, and now it’s time to create more supply.

“We spend all year building up stock to get ready for this, so we’re going to start again,” said Hanson.

Tourism Calgary said Calgary hotels saw a massive jump in reservations, although not pre-pandemic levels, enough to keep them afloat.

“In winter they were at three and six percent occupancy, so to go to 50 to 65 per cent occupancy, that is just life changing for them,” said Cindy Ady, CEO of Tourism Calgary.

The Calgary Chamber of Commerce said businesses did receive a boost from the Stampede being held this year.

“Realistically, businesses were not expecting a Stampede that reflected a full return to normal,” said Arianne Brady, spokesperson for the Commerce.

“What they prepared for, and were able to deliver, was an experience that included increased safety measures, reduced capacities, and a commitment to reopening safely and permanently so the economic potential of future events can be fully realized.”