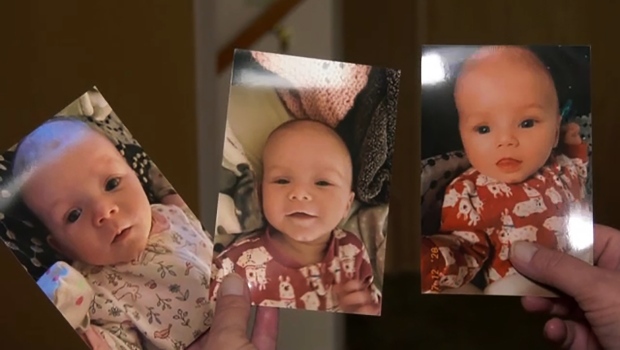 CALGARY — A Calgary infant in need of a specialized helmet will get it, thanks to the generosity of friends, family and total strangers.

Julie Young’s granddaughter, Mikylah Rose, was born with a rare cognitive disorder called Rhombencephalosynapsis. She also learned shortly after her daughter gave birth that the infant would need a specialized helmet.

“It’s for not only the head shape because she has a flat head this is going to help with the strengthening of her neck muscles,” Young told CTV News.

According to the province,  the helmets are only covered for infants needing them for daily use to ‘protect against self-abusive behaviour or seizure disorder and to protect or facilitate healing of chronic wounds or cranial defects.’

Helmets for cosmetic flat-head shape issues haven’t been covered since 2011. Instead officials say that can be treated with physical therapy.

“We just want to give our granddaughter the best quality of life that she possibly can have. It’s not just her. I’m sure there’s a lot of families out there who have gone through the same thing,” said Young.

Thousands of dollars have been raised through a GoFundMe page for the helmet and to go towards doctors appointments, which the family fears will add up quite quickly.

The family is grateful for all the support, especially since they say they weren’t fully aware of all the costs they’d be facing when Makylah was first diagnosed.

“I know we aren’t the only people out there having issues with things not being covered. I just want people to be aware. We should have asked some more questions but of course you don’t know until you go through it,” said Young.

Makylah will be fitted for her helmet in the coming weeks.