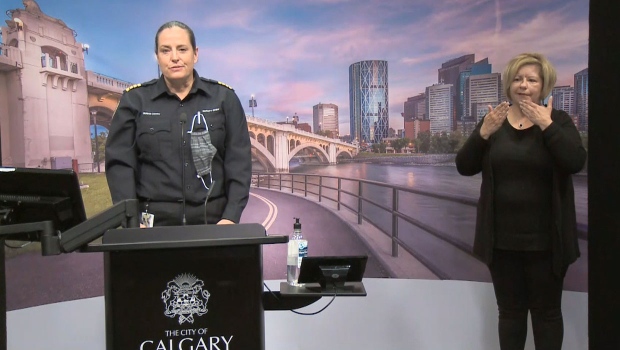 CALGARY — As the province’s new pandemic restrictions officially come into effect, city officials have an update on its COVID-19 response as well as a new addition to a critical team.

Henry, a veteran firefighter who was born and raised in Calgary, has played a number of key leadership roles in disasters throughout Alberta, including the 2013 flood, Slave Lake wildfire, Fort McMurray wildfire and, most recently, the COVID-19 pandemic.

She has also served as deputy chief with CEMA since 2015 and also helped lead Canada Task Force 2, a disaster response team.

“I couldn’t think of a more qualified and dedicated person to lead CEMA than Sue Henry, and an international search confirmed it,” said Mayor Naheed Nenshi Friday. “I know that she will keep us prepared for whatever threats may be waiting for us, and will act thoughtfully to protect Calgarians when called upon.”

Henry says her time with Sampson has thoroughly prepared her for the new role.

“I have learned so much from Chief Sampson these last years,” she said. “And, while typically you would take a new leadership role in calmer conditions – that is, not in the midst of a global crisis – I am committed to continue the fight against COVID-19 and any other emergency that comes our way. There is an amazing team and Agency that make this work possible.”

Sampson officially hands over the reins on Monday and Henry will step into the role on Dec. 1.