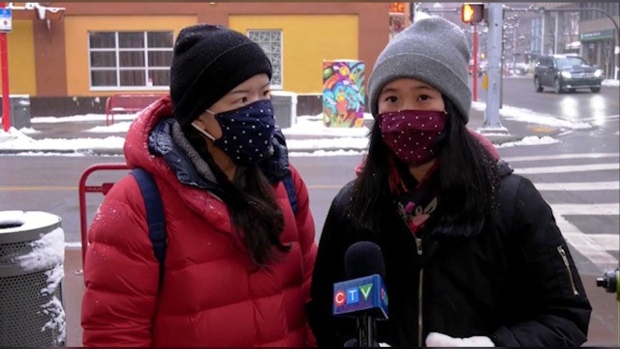 CALGARY — A group of people from Calgary’s Asian community are banding together and patrolling Chinatown in an effort to comfort anyone who might feel vulnerable. This comes as the number of anti-Asian hate crimes in Canada and the United States rise.

The founder of the Chinatown Walking Club, Gabriel Yee, said he felt the need to take action.

The origins of COVID-19 in China put a target on the backs of Asian people in Canada and the United States. Many have reported being violently attacked.

A report by the Chinese-Canadian National Council in Toronto shows that between the start of the pandemic and the end of February this year, there were 1150 incidents of anti-Asian racism in Canada. That’s more per capita than the United States.

Mckayla Ng, who was part of the walking group, says she was targeted while walking back to school during lunch hour.

“A lady told me to go back to my own country and she told me the whole pandemic started because of me.”

Jane Wong who is family friend of Lang says racism towards Asian people isn’t new but she is concerned about how the incidents have ramped up.

“I’m really sad this happens and it’s shocking to me at this day and age it’s still happening to our community,” she said.

While many non-profits are starting to collect data on anti-Asian hate crimes, Teresa Woo-Paw with ACT2EndRacism, says a lot of incidents go unreported.

“The silencing and the fear is very huge,” she said.

“We are working on a research project with the U of C to look at the factors that are preventing people from reporting.”

After the spa shootings in Atlanta where eight people were killed, six of them Asian women, “Stop Asian Hate” rallies ignited. In Pennsylvania Canadian actress Sandra Oh encouraged supporters and allies to look out for one another.

In Canada, rallies will be held in Calgary, Edmonton and Winnipeg on March 27. The Building Bridges Against Racism solidarity walk will be hosted by members of the Black, Indigenous, Asian and Muslim communities.

Jenzelle Salazar, a media coordinator with the rally says it’s important to unite.

“We are just a bunch of people who are coming together with this one distinct message and it’s to help towards abolishing racism in Canada,” she said.

The Building Bridges Against Racism rally will begin at the Peace Bridge near Eau Claire at 10 am on Saturday. For more information go to ACT2EndRacism.ca.