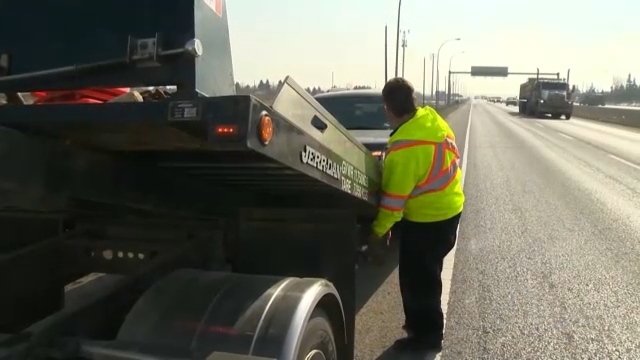 Starting June 30, tow trucks in Alberta will be allowed to use blue flashing lights in addition to amber ones to help increase visibility as crews work on the side of roads and highways.

Normally reserved for law enforcement, tow trucks will be permitted by the province to use blue lights in a one-year optional pilot project after Brad Rutherford, MLA for Leduc-Beaumont, introduced the idea as a private member’s bill in April.

“Too many tow truck drivers are involved in collisions or dangerous situations because motorists have difficulty seeing them while they’re working,” said Rajan Sawhney, in a news release.

“This pilot project is intended to increase safety for these operators and will help determine the best lighting for tow trucks in Alberta.”

According to the province, “additional consideration” is also being given to extending the pilot project to include snow plows later this fall.

The transportation ministry will work with the University of Alberta to research the best light configurations to ensure snowplows remain visible on roads in all types of driving conditions, the province says.

“Every Albertan deserves to be safe while they’re at work, even if their office is the side of the road,” said Jeff Kasbrick, Alberta Motor Association (AMA) advocacy and operations vice president.

“Every 64 seconds, AMA operators come to the rescue of a driver in need,” Kasbrick added. “And every 14 minutes, that call is a high-risk call.”

Since December 2019, the AMA says there have been at least 14 serious roadside incidents and 36 near-misses that involved tow trucks and passing vehicles in the province — including shattered safety cones and operators jumping out of the way of oncoming vehicles, Kasbrick said.

“A near miss it hardly is not,” he added. “That’s why improving the visibility of our roadside operators is critical to improving their safety.”

Flashing lights of different colours are more effective at grabbing people’s attention than a single one, Kasbrick said.

When it comes to snowplows contracted by Alberta Transportation, the province says there were 128 collisions between March 2018 and March 2021.

The introduction of blue lights for tow trucks comes on the heels of amendments to traffic safety regulations.

Starting in spring 2023, drivers travelling in the same direction on multi-lane highways will be required to slow down to at least 60 km/h and, where possible, clear one lane when passing stopped first responders and tow trucks.

‘NEED THE TOOLS TO DO OUR JOB PROPERLY’

After eight years of lobbying the province, Getschel says the change will help improve safety for both motorists and truck operators.

“This will set us apart from those other service vehicles,” he told CTV News Edmonton. “It’s hard for the motoring public to decipher a working tow truck from these other vehicles and these other entities.”

Since opening Oil Country Towing in 2011, Getschel says the company has had 10 serious collisions involving tow trucks, including one where the operator was seriously injured, and has “lost count” of all the near misses.

He estimates changing lighting bars to cost around $3,000 — a cost each tow company or operator will have to bear themselves. For Getschel, that is nothing compared to keeping operators safe on the road.

“People are finally understanding that we do a dangerous job, and we need the tools to do our job properly.”