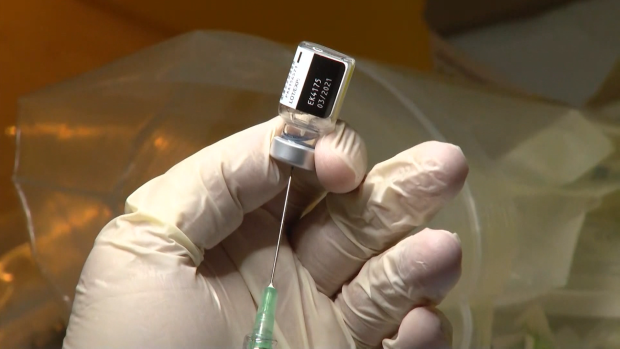 EDMONTON — Alberta’s chief medical officer of health is scheduled to provide a COVID-19 update on Thursday, with a big decision looming and precious vaccine shipments on the way.

According to Alberta Health, 46,800 doses of the Pfizer vaccine will arrive by the weekend.

Due to supply shortages in recent weeks, Alberta has focused on administering second doses to people. Pfizer recommends people receive their second dose of its vaccine no more than 42 days following the first.

According to the Alberta government website, 56,594 Albertans have been fully immunized.

The provincial government has said it would decide on or after Feb. 28 whether to proceed to Step 2 of its Path Forward reopening plan, depending on hospitalization numbers.

The hospitalization benchmark is a key metric in deciding whether Alberta will move to the second phase of its reopening plan.

In order to move to Step 2, which would relax public health restrictions on more businesses, Alberta must have 400 or fewer people in hospital and see the number decreasing.

According to Alberta Health data updated Wednesday, 360 Albertans are in hospital with COVID-19, including 60 in ICU.

During Wednesday’s briefing, Dr. Deena Hinshaw said that hospitalizations have “plateaued” in recent days. Other indicators Alberta Health is watching are positivity rates, new case counts and R values, all of which have decreased significantly since stringent restrictions were introduced in November and December.

Dr. Hinshaw said if health officials start to see those indicators increase, the province would need to consider whether to pause or even move backwards on the four-step reopening plan.

“It’s those trends and those three indicators that are the important metrics to watch,” she said.

Dr. Hinshaw’s briefing is scheduled to begin at 3:30 p.m.

You can watch her update on CTVNewsEdmonton.ca.