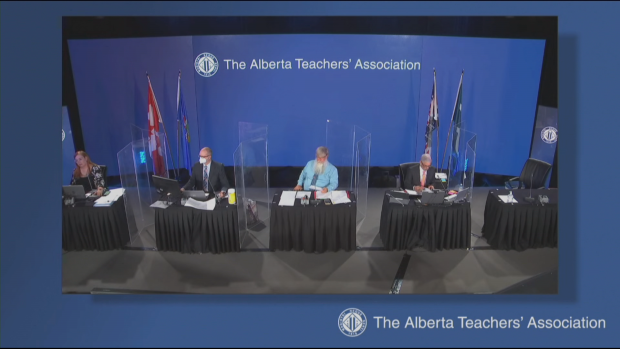 EDMONTON — The Alberta Teachers’ Association (ATA) passed a motion of non-confidence in the minister of education at its annual membership assembly.

In addition, motions to “depoliticize” the UCP’s draft K-6 curriculum development process and a lack of confidence in the draft curriculum were passed at the virtual meeting.

The motion of non-confidence in Minister of Education Adriana LaGrange passed with 99 per cent of delegates voting in favour.

According to the ATA, the motion was jointly drafted by 20 locals of the ATA and has “the highest level of collaboration seen on a locally developed resolution in the assembly’s recent history.”

The motions were discussed at the annual ATA Annual Representative Assembly on Saturday and Sunday.

Every year the assembly meets over the May long weekend to shape policy and direction for the ATA and teaching profession in Alberta.

The assembly also passed a motion expressing a “collective lack of confidence” in the draft curriculum that the consultation and development process for it as well as the content it contains is “deeply flawed.”

That motion passed with only seven delegates voting against, out of 401.

“Fundamentally, the K-6 draft curriculum is not developmentally appropriate for children age’s five to 11. Its design and content do not reflect the current research on elementary school learning, brain development, and student engagement.”

The motion for a moratorium asked the ATA to push the province to pause piloting and implementing the draft curriculum until it can undergo an independent and transparent review process from Alberta teachers, experts, and is inclusive of Indigenous and Francophone perspectives.

It passed with 97 per cent support.

Jenny Regal, vice president of the ATA provincial executive council, said the motion for a moratorium was necessary to create “breathing space.”

“There is not an easy quick fix (to the curriculum),” she said. “The pandemic has placed additional stresses on teachers, students, and parents.

“Piloting should not occur until the pandemic has passed.”

Regal added that the curriculum should fit the “modern social context” so that Alberta students are properly equipped for the future.

Having broader inclusion of voices in curriculum development would allow a stronger end-product, she said.

According to the ATA, the assembly acts as a parliament for the teaching profession in Alberta with delegates from across the province who are teachers representing, by population, each of the ATA’s 61 locals.

The ATA has approximately 46,000 members.

CTV News Edmonton did not receive comment from Minister of Education Adriana LaGrange after multiple requests.

Most school divisions in the province have already indicated they will not support the pilot.