EDMONTON — Alberta is reverting to Step 1 of COVID-19 restrictions and will shut down indoor dining as cases of the COVID-19 variants of concern increase across the province.

Tuesday at midnight, the government will reduce retail capacity to 15 per cent, close libraries, only allow one-on-one training and prohibit activities such as dancing and singing.

And on Friday, restaurants, bars and cafes must close indoor dining, but can remain open for outdoor patio dining, takeout and curbside pickup.

The province has seen a recent surge of cases and has added more than 800 new infections every day since March 31.

Since the start of April, the province’s active case count has grown by more than 1,700. Meanwhile, its test positivity has exceeded eight per cent each of the last five days, including 10.2 per cent on Tuesday.

“In the race between variants and virus, the variants are winning,” Kenney said.

“It is not clear yet if P.1 causes more severe outcomes than other strains, but we do know that it, like the B.117 variant, is more infectious,” Dr. Deena Hinshaw said. “We need to make sure we are looking at this big picture when considering all of the variants that we were seeing in the province, and taking actions every day to prevent spread of all strains of COVID-19.”

When asked if variants would become the dominant source of infections this week, Dr. Hinshaw said: “Yes, I think that’s accurate.”

Hospitalizations have remained above 300 six of the last seven days including the last five straight. The number of patients in intensive care units has grown more rapidly, up to 76 reported on Tuesday, nearly double the 40 reported three weeks prior.

Kenney said projections show Alberta could reach an average of 2,000 daily cases by the end of April based on current transmission rates, and up to 1,000 patients in hospital.

“We believe, based on the current trajectory, that if we don’t slow down this curve that we are set to hit the maximum capacity of our system in mid-May,” Premier Jason Kenney said.

“We can only do this together to prevent a long situation, a huge wave that causes massive cancellations of surgeries in our hospitals, and hundreds of preventable deaths,” he said.

THE PATH TO RECOVERY

Alberta had administered 734,403 vaccine doses and fully immunized just over 123,000 people as of Monday.

Starting Wednesday as part of Phase 2B, every Albertan 16 and older with a chronic condition can book a vaccine appointment, and people aged 55 to 64 with no underlying conditions can get an AstraZeneca shot, Kenney said.

The premier also announced the Path to Recovery, a number of stages with vaccination targets paired with reopening. 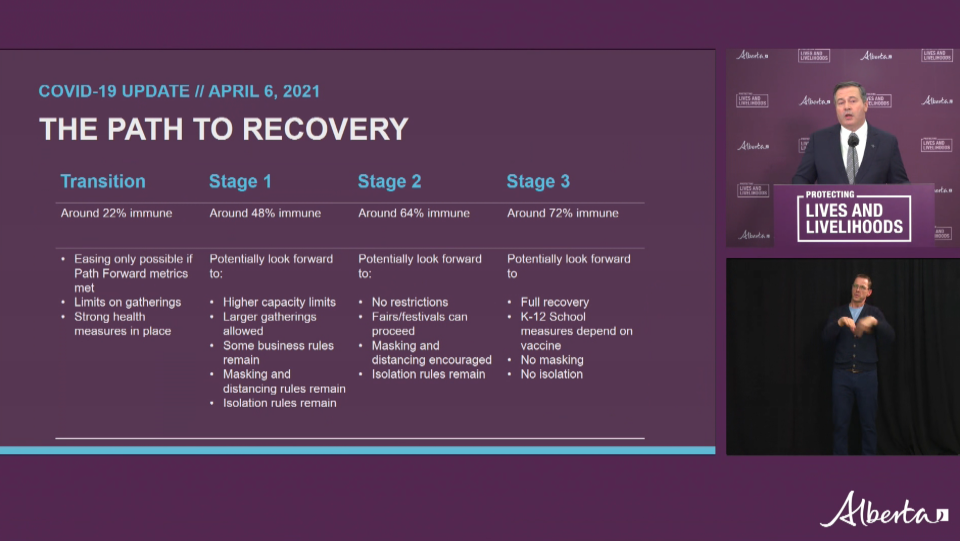 “By the end of May, that will be almost half of our population and by the end of June, it’ll be almost two-thirds with some level of protection, and by mid-September if Albertans take us up on the vaccines as I hope they will, almost three quarters of Albertans will have a good degree of immunity,” Kenney said.

“This is the end of the tunnel. It is our path to recovery. It is our path to freedom. Right now, we’re in a transition period, fighting to keep control of the virus, just a little while longer, until it is vanquished by vaccines.”

Alberta will share more details on its Path to Recovery later this month.