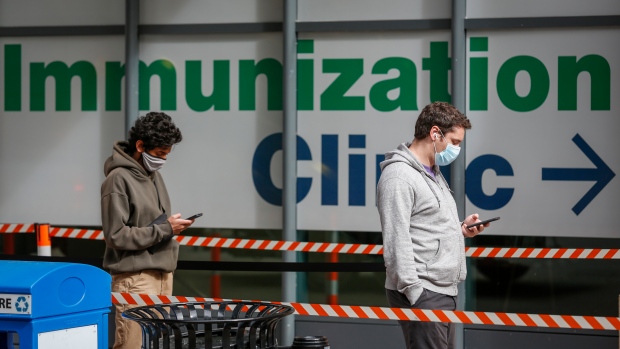 The numbers were reported in a live update given by Dr. Deena Hinshaw, the chief medical officer of health for the province, on Thursday.

Hospitalizations continue to decline with a total of 411 people in hospital and 120 in ICU.

One death in the Calgary zone was reported: a man in his 80s with comorbidities.

Approximately 305 variant of concern cases, including infections from previous days, were identified.

Hinshaw said the lower amounts of cases being identified has allowed variant screening for every case of COVID-19 to resume after the province halted this process in May.

All tests administered in the province will screen for variants other than the B.1.17 variant first identified in the United Kingdom. Hinshaw said this is because of the lower volumes of the other variants in the province and that there is still an opportunity for more “aggressive containment” of them.

Hinshaw reported that over 44,000 doses of COVID-19 vaccine was administered Wednesday, raising the provincial total to over 2.88 million doses given.

Since Jan. 1, about 96 per cent of all cases of COVID-19 in the province were either unvaccinated or diagnosed before vaccine immunity was fully built-up after two weeks of receiving a first dose, she explained.

Only 0.2 per cent of cases then occurred within people who had received their first dose of vaccine.

“This shows you the power of the vaccine at preventing infection,” Hinshaw said.

Within the same timeline, 93 per cent of cases requiring hospital care were people who were not vaccinated at all or diagnosed with infection within two weeks of receiving their first dose.

Eighty-eight per cent of deaths since Jan. 1 were people who had not received a vaccine or who contracted COVID-19 before they had immunity.

In terms of the P.1 variant first identified in Brazil, Hinshaw said a single dose is 75 per cent against infection and two doses raise that number to 89 per cent.

According to the top doctor, vaccine estimates for AstraZeneca or other non-mRNA vaccine effectiveness and emerging variants is not available at this time due to limited sample sizes.

“These numbers reinforce just how important vaccines are,” she added. “The evidence is clear: vaccines work and they save lives.”

“While no vaccine or treatment for any condition is ever perfect, these vaccines work better than we could have expected.”

Hinshaw said the province expects hospitalizations and deaths from COVID-19 to continue decreasing in Alberta as more of the population receives their first and second doses of vaccine.

“I also hope (the data) motivates more people to get protected with their first and second doses as soon as they can,” she added.

Further vaccine effectiveness data will be available on the provincial government’s COVID-19 dashboard and will continue to be updated.