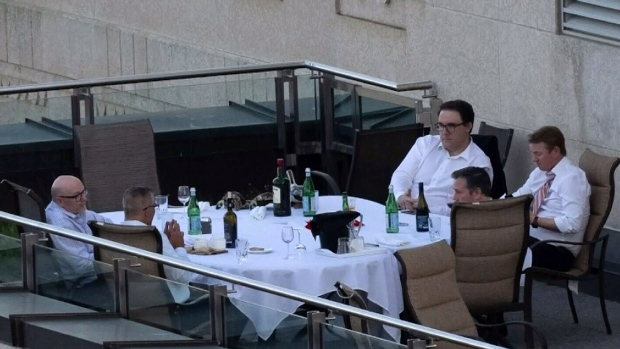 EDMONTON — Premier Jason Kenney, three ministers, and four other people dining on a rooftop patio continue to draw large amounts of criticism over the alleged flouting of the province’s gathering rules.

The group of United Conservative Party (UCP) members were spotted Tuesday evening on the balcony of the Sky Palace of the Federal Building on the Alberta Legislature grounds in Edmonton.

Dr. Deena Hinshaw, Alberta’s chief medical officer of health, was asked during her media availability Thursday about what she thought of the photo.

“I have the seen the photos,” she said. “I think there’s always sometimes, there’s always a bit of confusion about which rules apply in which settings.”

She added that food is allowed at outdoor social gatherings, although it should not be shared between people.

“I can’t comment on whether or not those two metres were continually followed (at the gathering),” Hinshaw said in response to questions about the gathering on the patio at the Sky Palace.

“Again, that’s not something that, that I can definitively say,” the top doctor added since she “wasn’t there.”

In a response to a similar question, Hinshaw said that it is difficult to say for certain if social distancing of two metres was maintained due to perspective.

“It’s critical for all of us to follow the requirements and public health measures in place,” she added.

When asked about role models and the need for public figures to set an example for Albertans, Hinshaw said people make mistakes sometimes.

“All of us have a role to play. And it’s critical that in this time period where we’re seeing our colleagues, our fellow Albertans get protection at a higher rate every single day that we hold to those measures so that we can lower the infection rate while we increase the protection.”

In a statement released after Hinshaw’s media availability, the official opposition said that her remarks “refused to clear” Kenney and members of his cabinet of any wrongdoing related to the gathering atop of the Sky Palace.

“There’s no denying that Jason Kenney and his ministers didn’t maintain physical distancing as they partied high up in the Sky Palace,” NDP deputy leader Sarah Hoffman said.

“It shows a complete lack of leadership and moral judgment. As Alberta families and small businesses continue to struggle and make sacrifices, Jason Kenney and the UCP are openly defying public health orders.”

During question period in the legislature, Hoffman shared remarks Kenney gave back in January after nine MLAs and senior staff travelled internationally despite public health orders directing people not to travel abroad during the pandemic.

“We will have to continue to show Albertans that we’ve learned the lesson that we have heard them and that we have to rebuild a culture of discipline and humility,” Hoffman quoted.

“When most Albertans think about discipline and humility, they don’t think about white table cloths, a 40 of Jameson, litres upon litres of wine, and San Pellegrino on the roof of the Sky Palace,” she added. “Will the premier show humility today, admit that he broke the public health orders, and apologize?”

“I did no such thing,” Kenney responded.

“On Tuesday, we moved forward with Stage 1 of Alberta’s Open for Summer Plan,” he said said. “We had a business dinner which we moved outside with six people that was fully rule compliant.”

Stage 1 expanded rules surrounding social outdoor gatherings so 10 people are permitted to gather and that physical social distancing must be maintained. Indoor social gatherings are still prohibited. Outdoor dining at restaurant patios is limited to a maximum of four members of a single household or three people if diners live alone. Tuesday’s gathering at the Sky Palace included a server.

“What the NDP should be doing is joining us in encouraging people to move things outside within the numerical numbers,” Kenney added. “Let’s embrace Alberta’s summer.

When faced with further questions about the dinner atop of the Sky Palace, Kenney said what was “really happening” was that the NDP were admitting they don’t want Alberta to move ahead in its reopening strategy.

“We don’t just permit,” Kenney said, “we actively encourage Albertans to move to outdoor social gatherings as long as it’s fewer than 10 people.”

The premier assured the opposition that Jameson is not an expensive booze.

“It’s a nice Irish whiskey but it’s not the finest,” Kenney said. “It’s a budget liquor.”

He added all the meals were takeout from local restaurants and that they were purchased by each of the people attending the dinner with personal funds.