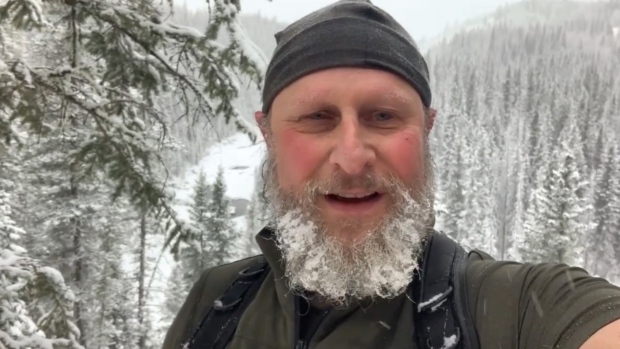 Police are investigating after a 59-year-old man was found dead near Waiparous Creek, northwest of Calgary, which officials believe was the result of a bear attack.

Cochrane RCMP were notified of a missing person just before midnight Tuesday when the man’s wife called police to say he had gone for a run about 6 p.m. and not returned. A search was then launched involving a helicopter and a police dog.

Just after 2 a.m. Wednesday, the man was found deceased just off Moss Trail, which has been closed while officials investigate.

Friends have identified the victim as Dr. David Lertzman, a senior instuctor at the University of Calgary.

Lertzman talked about his love for the outdoors in a video posted online April 21.

“I’m greeting you from the eastern slopes of Canada’s Rocky Mountains in southern Alberta,” says the bearded Letzman, who is wearing a tuque and standing in a snow-covered forest.

He says he works in the field of “sustainability, leadership development and reconciliation with Indigenous peoples.”

“This is my temple, it’s the dojo,” he added, motioning to the trees around him. “Folks, if you have a dream, if you have the drive, the determination, sincere questing spirit, fierceness and the humility, this is the place to do it. You can achieve just about anything.”

Alberta Fish and Wildlife is working with RCMP and the medical examiner’s office to determine the cause of death. Wildlife officers are also searching for the bear.

Kyle Juneau, a fish and wildlife inspector, said this can be a dangerous time of year in terms of human-wildlife conflict.

“It’s springtime and we all know in this area bears are plentiful, grizzly bears, black bears, the spring is especially dangerous, they’re hungry, they’re out of the den,” he said.

“They’re wandering to where they had food last fall.”

Should the bear be captured, Juneau said a decision will be made about its fate.

“Capturing the bear, relocating, euthanizing, all the options will be weighed out but it’s too early to tell what we’re dealing with,” he said.

“Is it a male bear? Is it a female bear with cubs? All of those things we refer back to our matrix and consult with our biologists and make the appropriate decisions then.”

Waiparous Creek is about 70 kilometres northwest of Calgary.