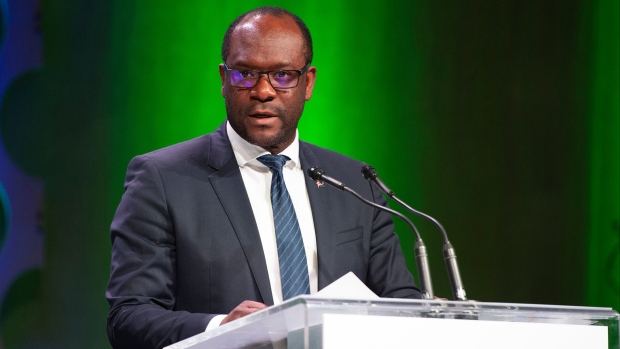 CALGARY — Alberta’s justice minister and solicitor general is accusing conservative “opponents” — a group he says includes the media, provincial NDP and the federal Liberals — of wanting Alberta’s healthcare system to collapse during the pandemic.

Minister Kaycee Madu defined his stance in a series of Facebook comments added to his own May 8 post of a photo of his COVID-19 vaccination on his personal account as well as a May 6 post of George Clark, leader of the Albertans First Movement.

In a reply to another commenter who questioned the severity of COVID-19 on Clark’s post, Madu agreed that the majority of people who contract the virus will make a full recovery before arguing that everything must be done to prevent the potential death of any Albertan and potential overwhelming the province’s healthcare system.

“My point is that I don’t think it will be responsible to simply wait until we have a disaster on our hands,” said Madu in his post. “That’s what the NDP, the media and the federal Liberals were looking for and want. We simply couldn’t allow that to happen.

“While I hear the anger and disappointment of our people, I will continue to urge calm, patience and cooperation as we near the end of this pandemic. I ask that we don’t tear ourselves down and hand over Alberta to the NDP. We have done so before, and it did not go well for us, and in my view, we will be making a monumental mistake doing so again simply because conservatives disagree on the pandemic restrictions response.”

Madu reaffirmed his position after sharing his vaccine photo on social media. When a follower asked him to take steps to “restore peace” and “stop the path to conflict”, Madu declared his commitment to both the cause and to unity — before immediately drawing a line in the sand with his comments that followed.

“Madu’s comments are despicable, and he must apologize immediately,” said Shepherd. “Our Opposition Caucus has always called for more support for our frontline healthcare heroes, essential workers, and all the Albertans who have suffered immensely through this pandemic. Madu and his colleagues have ignored medical advice, fought a war with doctors, and threatened 11,000 frontline healthcare workers with layoffs.”

“It’s typical of the Kenney government to blame others for their tragic failure to keep our province safe,” added Sabir. “Madu’s senior officials directed police not to enforce public health orders, and he looked the other way for months while anti-maskers marched through the downtown cores of our major cities, putting thousands of people at risk. Now he wants to blame the media.

“Alberta journalists are Albertans, and they want to see this pandemic end as quickly and safely as all of us. Madu must personally apologize for these comments immediately.”

CTV News requested clarification from the minister and an interview regarding the Facebook comments. A spokesperson for the ministry issued a statement to CTV News Monday afternoon stating Madu stood behind his social media posts and would not be apologizing.

“The Minister was referring to the increasing tendency of different groups, including the NDP, to exploit the pandemic for their own political purposes. We see this every day with the NDP’s overcooked and incendiary rhetoric both in the legislative assembly and on social media. The Minister won’t apologize for stating the obvious.”