As farmers start seeding their crops for the year, in much of Alberta they are planting in dry, dusty ground.

As Ian Donovan seeds his canola just north of Mossleigh, a cloud of dust follows his tractor. He says that’s not how it’s supposed to look.

“The first of May is usually damp and wet. You shouldn’t see any dust at all,” said Donovan. “We have no residual (moisture) at all.”

Donovan calls it reminiscent of last year when drought resulted in the worst harvest in his 30-year farming career.

“That was hands down the worst crop I’ve ever combined. Corner to corner, we had eight bushel (per acre) canola crops where the year before, it’s usually anywhere from 40 to 50 bushels,” he said.

But as he seeds his crop for 2022, Donovan says he’s finding it hard to muster the traditional ‘farmer’s optimism.’

There was not much snow through the winter and the spring snowstorms that hit central Alberta passed by the farmland south of the Trans-Canada highway.

“That’s basically our fuel tank until we get rain, and so if the fuel tank is empty and (there’s) no rain in the forecast, it’s a little hard to be as optimistic as the guy should be.”

The Alberta government monitors soil moisture across the province. In its April 27 outlook, it paints a bleak picture of the conditions in southern parts of the province saying, “This is coming off the heels of a long dry spell that for many began in August 2020.”

“As spring emerges many areas here have received less than 20 mm of moisture in the last 60 days and the need for moisture is immediate,” it reads.

“Through parts of the Southern Region, many large areas are experiencing one-in-50 year lows, with about 60 per cent of the land estimated to have reserves this low less than once in 12- years.” 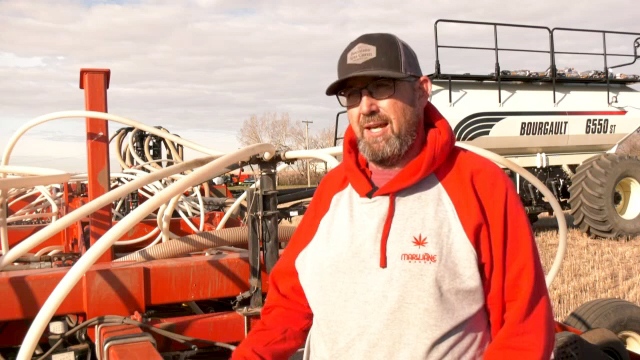 Ian Donovan grows canola just north of Mossleigh and said last year was one of the worst he’s seen in 30 years.

The one bright spot for farmers is that commodity prices are at record highs, meaning if they can bring in a good crop, there is money to be made. But Donovan says that will also be offset by record high input costs.

He’s burning through about 80 litres of gas an hour while seeding, his fertilizer costs have skyrocketed and even his canola seed jumped from just under $450 a bag last year, to more than $650 this year.

Donovan notes a 1,000 acre farm is considered small in Alberta, and that an average, mid-sized farm could be shelling out close to $1 million just to bring a crop to harvest.

He says since most farm businesses operate on bank loans or lines of credit rising interest rates also present a financial challenge for farmers.

“We’ve been very lucky at low, one-and-a-half, two per cent interest rates. If they go up to six or  seven per cent, I mean, those carrying costs are going to be huge for guys.

“You always hoped the next year is going to be better. But if we have two or three of these, it’s going to be hard and a lot of guys and we might see like the early 80s where guys just finally hang their hat up and say enough of it.”

This will be Donovan’s last year planting a crop. After 30 years on the land, he’s hanging up the keys to the combine this fall to concentrate on his family’s new cannabis business. Still farming, but now indoors and away from the fickle hand of Mother Nature.