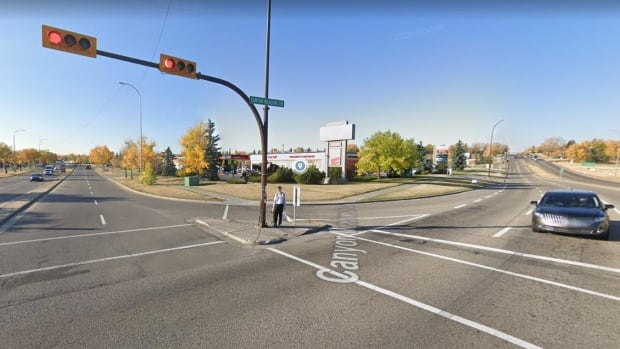 A Calgary woman has died in hospital after being struck by a vehicle while crossing the road in southeast Calgary earelier this week.

The woman, who was in her 20s, was crossing the intersection, along with another person, at Canyon Meadows Drive and Deer Ridge Drive S.E. on Monday at around 10:15 p.m.

She was struck when a 2009 Hyundai Accent travelling northbound on Deer Ridge Drive began to turn westbound onto Canyon Meadows Drive, police said.

The pedestrian was thrown a “significant distance” and sustained serious injuries.

The driver, a man in his 70s, remained at the scene. Calgary Police Service investigators are not considering speed or impairment to be factors in the accident.

The investigation into the incident is still ongoing, and anyone who may have witnessed the collision and has not yet spoken with police is asked to contact the CPS non-emergency number, 403-266-1234.

This is the sixth fatal pedestrian collision this year, police say.

In February, city council approved lowering the speed limit from 50 to 40 km/h for residential side streets, in a bid to improve road safety in neighbourhoods.

The new residential speed limit changes come into effect in Calgary on Monday, May 31.