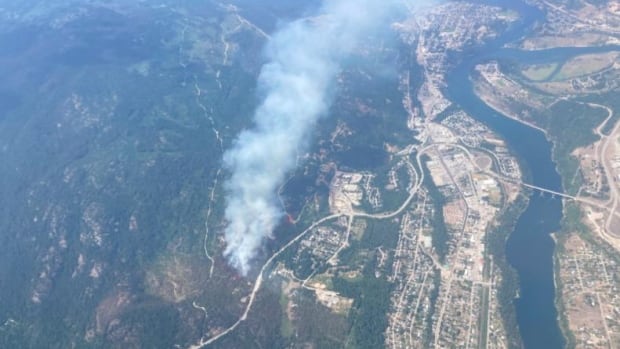 A wildfire near the city of Castlegar, B.C., has resulted in evacuation alerts and orders for a number of streets on the edge of town and the closure of a major highway.

The fire was 15 hectares in size as of 7:15 p.m. PT but had not been contained, according to the B.C. Wildfire Service. Twenty-five firefighters, two helicopters and two air tankers are tackling the fire, which, at the moment, is believed to be human caused.

“You could basically see it anywhere in Castlegar,” said Sue Heaton-Sherstobitoff, a city councillor in the community of around 8,000 people.

“It’s been a lot of worry, a lot of smoke, and a lot of watching the helicopters battle it.”

28 properties just outside of Castlegar are under a evacuation order issued by the Central Kootenay Regional District, the full list of which can be found here.

People living in the following streets in the Kinnaird neighbourhood in the southwest of the West Kootenay city are under an evacuation alert, which was an order for several hours Thursday afternoon before being downgraded:

Highway 3 is also closed in Ootischenia, east of Castlegar, with an alternative route available on Highway 3B.

‘People are quite anxious’

Castlegar resident Leanna Zwick, who lives across the Columbia River from the fire, said it had been growing since the late morning.

“We noticed the plume of smoke and of course in this type of weather, that’s never a good sign and it spreads so fast,” she said.

The city’s emergency operations centre says the fire is on the north side of Highway 3, but there is also a small spot fire on the south side.

It’s one of many fires that have developed across B.C. in the past two days after lightning and high winds followed record-high temperatures earlier this week.

“People are quite anxious,” said Zwick, who added that many people living outside the evacuation zones are preparing to leave for the weekend out of an abundance of caution.

“I think especially after seeing what happened in Lytton in such a rapid way. The conditions are just too dry to have a great comfort so we can all sleep tonight.”